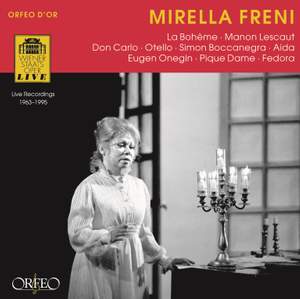 the spontaneity of the theatre brings a special vividness to all of these interpretations...Freni portrays every character very touchingly indeed, especially Elisabetta...[She] blazes through... — International Record Review, November 2010 More…

Act I: Io vengo a domandar

Mirella Freni, who celebrated her 75th birthday a few weeks ago, is one of the exceptional singers who have emerged from Italy, the home of opera. And unlike those other 'exceptional' talents who crop up every few years (and who often disappear just as quickly), Mirella Freni’s standing is heightened by the exceptional length of her career, which was so rich in peaks and free of troughs. That success finds confirmation in this selection of archive recordings chosen from more than the three decades Mirella Freni sang at the Vienna State Opera.

She began with a sensational debut as Mimì in Puccini’s La Bohème. Within the space of six months, her Mimì had won the public’s heart at both La Scala, Milan and in Vienna, both under Herbert von Karajan. Her Rodolfo at the time was Gianni Raimondi, though the Viennese archives also document her longstanding partnerships with Luciano Pavarotti (Carlos Kleiber) and Plácido Domingo.

It was with Domingo (under the baton of James Levine) that Mirella Freni repeated her Salzburg Festival success, in Vienna, as Desdemona. As with her Mimì, her Elisabetta in Don Carlo under Claudio Abbado in 1989 was astonishing, for her voice had lost none of its freshness in the ten years since singing the role under Karajan.

In that same decade, she was also able to portray, convincingly, the youthful roles of Amelia in Simon Boccanegra and Manon Lescaut. Once again at Pavarotti’s side, this time for a Verdi concert in 1990, her public was inspired by excerpts from Aïda – unusual reprertoire for her.

She also proved with two Tchaikovsky roles that she was a diva in more than her mother tongue alone. Neither her Tatyana in Eugene Onegin nor her Lisa in Pique Dame (both with Seiji Ozawa at the helm) can be left out of this 'Vienna' portrait of her, as with her last role at the Vienna State Opera: her assumption of the title role in Giordano’s Fedora brought back this operatic rarity to a renewed appreciation.

the spontaneity of the theatre brings a special vividness to all of these interpretations...Freni portrays every character very touchingly indeed, especially Elisabetta...[She] blazes through the Letter Scene, recorded in 1988, seemingly consumed by Tatyana's feelings