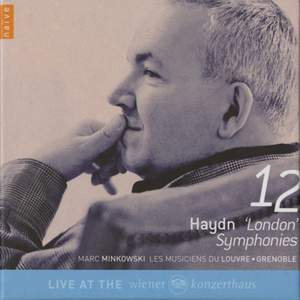 Marc Minkowski and his period-instrument band may be thought of as early music specialists, yet their approach is the reverse of doctrinaire...Those who feel they have heard some of these works... — BBC Music Magazine, August 2010, 4 out of 5 stars More…

An exceptional and eagerly-awaited live recording of Haydn’s 12 ‘London Symphonies’ performed during a series of highly-acclaimed concerts in Vienna by Marc Minkowski and Les Musiciens du Louvre-Grenoble.

The ‘London Symphonies’ on this four-CD set were recorded at performances given at the Wiener Konzerthaus in June, 2009. They caused great enthusiasm among audiences and critics alike: “an orchestra playing at its very best – the performances of Haydn were exemplary. Exhilarating!” (Wiener Zeitung, June 2009). These concerts by Marc Minkowski and his orchestra in Vienna were praised by the international press: “the performance was a real success, warmly acclaimed by the audience.” (Kronenzeitung, June 2009). The recording has just been awarded a ‘Diapason d’Or’ by the French Magazine ‘Diapason’.

Marc Minkowski’s Les Musiciens du Louvre-Grenoble, which he founded in1982, is one of the most versatile, inventive and original ensembles currently active. The orchestra is particularly familiar with Haydn’s work, having partly established its reputation with critically acclaimed interpretations of this repertoire. Minkowski’s recording of the ‘London Symphonies’ is a significant contribution to the conductor’s project to reinterpret symphonies and operas from the Baroque era right through to modern music.

Marc Minkowski and his period-instrument band may be thought of as early music specialists, yet their approach is the reverse of doctrinaire...Those who feel they have heard some of these works rather too often will have their affection renewed by this lively set.

Here at last is a period recording that approximates the scale of the performances of the 1790s...there is every reason to regard this as a notable landmark in the Haydn discography.

Minkowski's orchestra is a period-instrument band, but a particularly well-upholstered one with a sizeable string section, so there is nothing undernourished about the sound, and the performances have real warmth and generosity about them. They are full of musical wit too

Marc Minkowski's four-disc set with Les Musiciens du Louvre Grenoble exploits every nuance of the London Symphonies...This is the finest period instruments ensemble in the world.

...a really fresh look at Haydn's masterpieces. Minkowski highlights the innocence of Haydn's beginnings, which then blossom into melodic flower (as in No 99's adagio), or erupt into contrapuntal passion (in the incandescent finale of No 95)...there is an overwhelming sense of excitement.