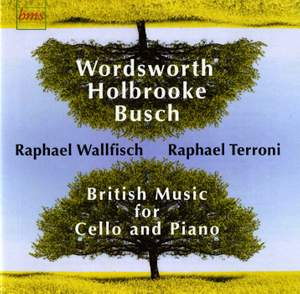 This CD unites significant cello works by three London-born composers who have undoubtedly had less than their due of critical recognition.

The earliest of Wordsworth’s works in this recital is the Nocturne, op. 29 which he originally composed in 1946 for viola da gamba and subsequently arranged for cello. The Scherzo, op. 42 was written three years later in 1949, during the period of Wordsworth’s greatest public success. The Sonata No. 2 in G minor, op. 66 for cello and piano is probably his most important cello-piano composition and was composed in 1959, the year he met Shostakovich in the USSR. There seems to be an audible kinship between the two composers in this dark-hued and often depressive work, which is cast in a single large movement in several contrasting sections. In contrast to this large-scale and strenuous sonata, the Sonata for Violoncello, op. 70 is in three concise movements. It was composed in 1961. Like all such works it is composed to some extent in the shadow of J.S. Bach’s solo cello Suites, but manages to define Wordsworth’s independence of mind and melodic invention.

Josef Holbrooke was devoted to chamber music throughout his life, and left many of his most admirable and characteristic creations in that genre. The Fantasie-Sonate, op. 19 is his most substantial work for cello and piano, and was composed in 1904.

London-born of naturalized German parents, William Busch studied piano with Wilhelm Backhaus and Egon Petri. He was a rare composition pupil of Bernard van Dieren as well as a student of John Ireland. Alan Bush was William Busch’s close friend as well as his teacher; other friends included Gerald Finzi and Howard Ferguson; all of them seem to have contributed something to Busch’s mature idiom. It was for Florence Hooton that he wrote the Suite for Cello and Piano, his most substantial cello-piano work, in 1943. The two short pieces A Memory and Elegy are among Busch’s last compositions, written in June and July 1944 respectively.

With his beguilingly rounded, mellow tone and impeccable technical address [Moser] enjoys a strongly instinctive rapport with his excellent pianist...Theirs is a superbly suave, thoroughly civilised partnership that will give great pleasure. At the same time, there's absolutely no want of emotional heft or edge-of-seat abandon when called for