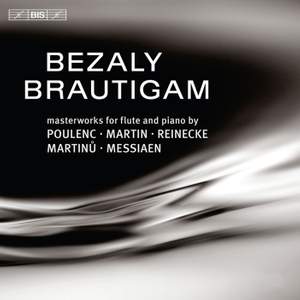 Sharon Bezaly is rarely less than impressive. Her well-constructed programmes are performed with a mixture of virtuosity and rich tone, making her name almost a guarantee of quality. Partnered... — BBC Music Magazine, September 2010, 3 out of 5 stars More…

Reinecke's work is a musical re-telling of the well-known story of Undine, the water spirit who marries a knight, but is betrayed and takes her revenge on him. Frank Martin's virtuosic Ballade (1939) features an acrobatic flute cadenza, roaming melismas and irrepressible cascades, generating a compelling sense of drama. In 1945, while in exile during the German occupation of Czechoslovakia, Martinu composed his Flute Sonata, in which the virtues of his distinct musical language are plain to hear - lyrical lines, a rhythmic drive which is both energetic and lively and an effective use of tone colour. Six years later the bird-lover Messiaen composed Le merle noir, constructed around the song of the blackbird, which he painstakingly noted down and then found the means to imitate on the flute. Poulenc's melodic Sonata, finally, has become a signature work for its composer: its lightness, transparency and sonic refinement have charmed audiences ever since the first performance.

Sharon Bezaly is rarely less than impressive. Her well-constructed programmes are performed with a mixture of virtuosity and rich tone, making her name almost a guarantee of quality. Partnered here...by the equally exceptional Ronald Brautigam, Bezaly provides another showcase for their talents.

if you want frankly seductive Poulenc, then Bezaly has your number. At no point in this programme does one feel let down by her playing, which always has character. Brautigam does not lack personality either.