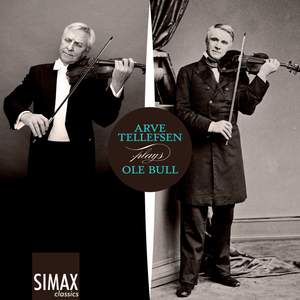 Bull, O: In Moments Of Solitude

This year marks the 200th anniversary of the birth of the legendary Norwegian violinist/composer Ole Bull. The resurgence of interest in his music is in no small way down to the championing of his work by his compatriot, the internationally renowned soloist Arve Tellefsen. On this special re-issue Tellefsen is joined by the Trondheim Symphony Orchestra and conductor Eivind Aadland as well as the notable pianist Håvard Gimse in performances of many of Bull’s finest pieces for violin. The disc also features two pieces by Norway’s greatest composer, Edvard Grieg.

Throughout his long career, Arve Tellefsen has been an ardent advocate of bringing the musical legacy of the great 19th century Norwegian violinist/composer Ole Bull to a worldwide audience. On this anniversary reissue we hear him perform some of Bull’s bestknown music for the instrument, including works for violin and orchestra, as well as with smaller instrumental groups, and several pieces for violin and piano. This year the International Festival in Bergen includes a night devoted to Ole Bull’s music, with Arve Tellefsen the main featured artist.

As a special addition, the CD also features two works by Edvard Grieg, which he and Ole Bull performed during their only known appearance together in 1873. These two pieces, Gavotte and Menuet, later became the Ved Mannjævningen and the 2nd movement of the F major violin sonata.