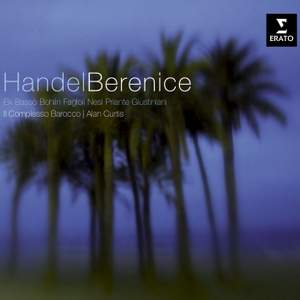 ...the characterisation of the title role has a complexity not unlike that of Rodelinda. Spurred on by superior material...Ek delivers an outstanding performance in the soft-grained acoustics... — BBC Music Magazine, September 2010, 3 out of 5 stars More…

Recording of the Week,  Handel's Berenice

With this release of Berenice, Alan Curtis – described by the New York Times as “one of the great scholar-musicians of recent times” – adds his seventh recording of a complete Handel opera to the Virgin Classics catalogue.

“One of the great scholar-musicians of recent times” is how the New York Times has described Alan Curtis, while Gramophone judges that: “Alan Curtis has done more than most to prove that many of Handel's 42 operas are first-rate music dramas”, and the BBC Music Magazine has praised him as “a seasoned Handelian who has contributed, perhaps more than anyone now, to the composer’s operas on disc.”

This Berenice is Curtis’ seventh complete recording of a Handel opera for Virgin Classics; the six previous works (Admeto, Arminio, Deidamia, Radamisto, Rodrigo and Fernando, rè di Castiglia) were re-released in a special 15-CD box in 2009, and 2011 will bring the release of Ariodante, with Joyce Di Donato in the title role, supported by Karina Gauvin, Sabina Puertolas, Marie-Nicole Lemieux, Topi Lehtipuu.

In Berenice, set in Alexandria in 80 B.C., the title role of the Egyptian queen is taken by Swedish soprano Klara Ek, while Italian countertenor Franco Fagioli is Demetrio, the man she loves, but who loves her sister Selene, played by Italian mezzo Romina Basso; another Swedish soprano, Ingela Bohlin takes the travesty role of Alessandro, the man Berenice is expected to marry for political expediency, but whom she finally happily chooses as her consort.

Berenice was composed at a turbulent time in Handel’s career, when he was undergoing both professional and personal crises. It turned out to be the last opera he wrote for John Rich’s new theatre in Covent Garden and was performed only four times before disappearing from view. The first staged production since the 18th century took place in 1985 in the UK, at the University of Keele; the opera was subsequently staged in Cambridge in 1993; in Germany, the Karlsruhe Handel Festival presented Berenice in 2001.

Alan Curtis' ensemble Il Complesso Barocco is based in Venice, the home of the American-born writer Donna Leon, celebrated around the world for her series of thrillers set in the Italian city. Mr Curtis and Il Complesso Barocco would like to thank Ms Leon “for having given every conceivable form of support, encouragement and inspiration for this project”.

...the characterisation of the title role has a complexity not unlike that of Rodelinda. Spurred on by superior material...Ek delivers an outstanding performance in the soft-grained acoustics of the Villa San Fermo, Lonigo.

Nothing is merely pretty or polite. Klara Ek makes a vivid Berenice...As ever, Curtis encourages his orchestra to cajole, plead, grieve and rage as eloquently as his singers...In sum, a compelling account of an opera that...contains far too much fine music to merit its generally poor reputation amongst Handel scholars.

The performance is admirably sung, dominated by Klara Ek's rapturous portrayal of Berenice...Curtis secures consistently fine playing from Il Complesso Barocco and directs the opera itself with a perfect combination of sensitivity and vitality.

Klara Ek sings it [wonderfully]— with excellent support from the countertenor Franco Fagioli and Ingela Bohlin as rivals for her hand, and the sumptuous Romina Basso as her sister Selene...It’s a must for hardcore Handelians

The recording is wonderful, one of Alan Curtis's finest, and conducted with an acerbic elegance that hovers between sensuality and anger. Klara Ek's blazing, impetuous Berenice is worth every one of those five stars on its own, though there's also some fabulous singing from Ingela Bohlin (Alessandro), Romina Basso (Selene) and Franco Fagioli (Demetrio)

...this recording is immaculate...Although Alan Curtis ranks as one of the most prominent scholars of baroque music, there is no hint of the academic in his spry and witty conducting. Il Complesso Barocco plays with unfailing delicacy, grace and charm

Alan Curtis and...Il Complesso Barocco unveil a score featuring many individual delights. They bounce out of singers’ throats, accompanied by an unusually restrained orchestra of strings, with the occasional woodwind highlight...Throughout, Curtis’s group play with unfussy vigour and clarity.