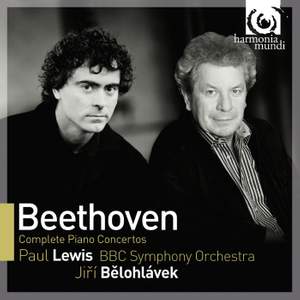 This new set of the Beethoven concertos is interestingly different in emphasis, in that whereas I had previously thought of Lewis as primarily a thoughtful, searching player...these accounts... — BBC Music Magazine, September 2010, 4 out of 5 stars More…

Recording of the Week,  Beethoven - Paul Lewis and the BBC Proms

At the press launch of this year’s BBC Proms season Roger Wright (Controller, BBC Radio 3 and Director of the BBC Proms) announced that for the first time ever, one pianist, Paul Lewis, would be performing all Beethoven’s Piano Concertos, albeit with different orchestras.

His complete set of the Beethoven sonatas enjoyed extraordinary acclaim in the UK, culminating in the prestigious ‘Recording of the Year’ award from Gramophone magazine for the fourth volume in 2008. Encouraged by what has now become a worldwide success, Paul Lewis has chosen to turn his attention to the five piano concertos with these distinguished partners. Recorded between July 2009 and March 2010, these interpretations paint a portrait of Beethoven full of light and shade.

This new set of the Beethoven concertos is interestingly different in emphasis, in that whereas I had previously thought of Lewis as primarily a thoughtful, searching player...these accounts score more strongly on extroversion, combativeness vis-a-vis the lively accompaniments of the BBC Symphony Orchestra under Jiri Belohlávek, and even mischief.

Lewis's partnership with Jiri Belohlávek is an ideal match of musical feeling, vigour and refinement...Throughout the cycle Lewis is enviably and naturally true to his own distinctive lights, his unassuming but shining musicianship always paramount...you return refreshed and with a renewed sense of Beethoven's range and beauty...This is a cycle to live with and revisit.

Lewis's handling of the solo parts is refreshing, imaginative and responsive to the shifting moods of the music in these concertos, as well as technically impeccable

Beethoven’s spectrum of utterance in this concerto canon, broadened further in the Fourth and Fifth, is something of which this set makes you supremely aware. This is a superb set in which Lewis asserts his own inspiring voice together with his mature insight into Beethoven’s creative mind.

Lewis isn’t a “look at me” pianist. No barnstorming rage; no cute puppy antics. His simple goal is to get inside the music and propel it outwards, heart and soul, letting it speak without hindrance...Belohlávek shapes the orchestra’s contribution with almost as much care...Here is high-quality music-making, subtle but authoritative, made to last.

Paul Lewis, a highly intelligent player, with a kind of nervous intensity and brilliant insightfulness, very much able to hone in on detail, a very strong sense of line