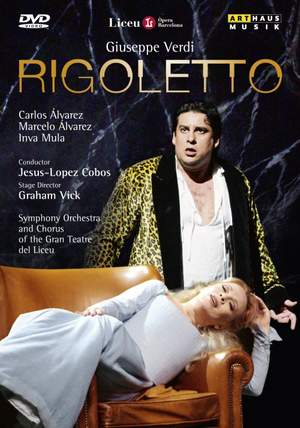 [Vick's production] has an ingeniously designed revolve at the centre of the set...The performance is strongly conducted by Jesus Lopez-Cobos, and Inva Mula again makes a memorable and moving... — Penguin Guide, 2010 edition More…

In their series of celebrated opera productions from the Gran Teatre del Liceu in Barcelona, Arthaus presents a staging of Rigoletto, one of Verdi’s most popular operas. The tragic opera about the Duke of Mantua, the court jester Rigoletto and his daughter Gilda forms part of the composer’s trilogia popolare together with La Traviata and Il Trovatore. It is full of melodious arias, expressive duets and highly dramatic orchestration.

With the brilliant Marcelo Álvarez singing the Duke of Mantua and baritone Carlos Álvarez, whose Rigoletto has been hailed as the perfect embodiment of Verdi‘s court jester, appearing in the title role, this production presents international stars in two of the leading roles. The dramatic requirements of this well-conceived and convincing interpretation are both musically and visually extremely well met by the leading male singers and Inva Mula’s Gilda. She is a Verdi soprano par excellence. The remarkable ensemble, orchestra and chorus of Barcelona’s Liceu under the experienced baton of Jesús López Cobos prove the opera house’s international standing once again. Graham Vick’s production and Paul Brown’s sets and costumes aim to convey the essence of the drama conceptually rather than literally which makes for a captivating performance.

[Vick's production] has an ingeniously designed revolve at the centre of the set...The performance is strongly conducted by Jesus Lopez-Cobos, and Inva Mula again makes a memorable and moving Gilda...Carlos Alvarez, too, is a powerful and dominating Rigoletto, although his vibrato may not please all ears.