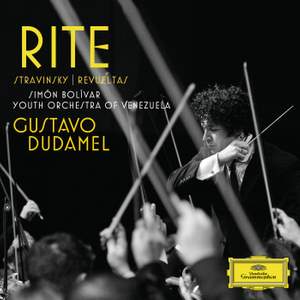 ...a Rite that develops thrilling momentum twice over, fast but without haste. It's the outcome of well-judged pacing and an awareness that extremes of pace and weight have to be kept for real... — BBC Music Magazine, August 2010, More…

The Augurs of Spring: Dances of the Young Girls

Ritual of the Rival Tribes

Procession of the Sage

Mystic Circles of the Young Girls

Evocation of the Ancestors

Ritual Action of the Ancestors

Sacrificial Dance (The Chosen One)

In Le Sacre du Printemps, Stravinsky transformed painter Nicholas Roerich’s fleeting vision of a pagan ritual in which a young girl dances herself to death as a sacrifice to the god of Spring into a musical simulation of barbaric primality.

...a Rite that develops thrilling momentum twice over, fast but without haste. It's the outcome of well-judged pacing and an awareness that extremes of pace and weight have to be kept for real climaxes...Details are fine, unexaggerated, and they add up...Astonishing playing; astonishing music.

...the verve of these performers is quite incredible. But can they convincingly handle The Rite, with its batty accelarations and daringly skewed rhythmic idiosyncracies? Happily, the answer is resoundingly positive throughout. Alongside the gusto and through the joie de vivre of this orchestra, they are truly microscopic in their detail.

The Venezuelan players are well drilled. In Stravinsky’s Rite of Spring they play with drive and force; they follow the contours of the music; they do the things that the score implies. They are impressive in the visceral climaxes and propulsive rhythms...if Revueltas is a passion, the CD is a must.