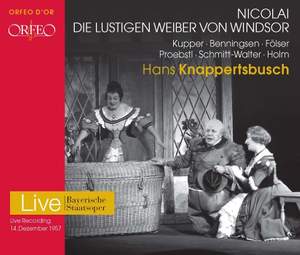 Chorus of the Bavarian State Opera...

Act I: Finale: So hab' ich dich errungen (All)

Hans Knappertsbusch conducted a far broader spectrum of repertoire, at least in Munich, than his unique reputation for Bruckner, Wagner and Strauss might let us suppose. Knappertsbusch even left his mark on the Romantic comic opera The Merry Wives of Windsor by Otto Nicolai (after Shakespeare). He conducted it at the Prinzregententheater, which became the legendary, temporary home of the Bavarian State Opera in the years after World War II. The stark contrasts between the tender lyricism of the score and its earthy, humorous elements are savoured to the full by Knappertsbusch and the Orchestra of the Bavarian State Opera. Nicolai was born 200 years ago on 9 June 1810. At the Bavarian State Opera in 1957, the year when Knappertsbusch conducted the opening night of this production, the Merry Wives were above all an example of great ensemble theatre. The most prominent casting was of Mr and Mrs Fluth (in Shakespeare, the ‘Fords’), namely Annelies Kupper – Munich’s favourite lyric soprano of the day, and Karl Schmitt-Walter, perhaps the most versatile baritone of his generation. Falstaff was sung by Max Proebstl, a perfect example of a singer whose commitment to a single ensemble shows up the flaws of today’s industry of travelling stars. The second married pair on stage, sung by Lilian Benningsen and Kieth Engen, also proof of the virtues of a permanent ensemble, for their characterisation of members of the old English bourgeoisie, have profited from their experience of singing roles such as Princess Eboli or King Heinrich. As rivals for the hand of Anna (charmingly sung by Liselotte Fölser after the manner of Pamina) we find two brilliant tenors in the shape of Richard Holm (Fenton) and Paul Kuën (Junker Spärlich). Finally, the chorus of the Bavarian State Opera also guarantees the most important ingredients in a piece such as this, namely a delight in humour and playfulness throughout.