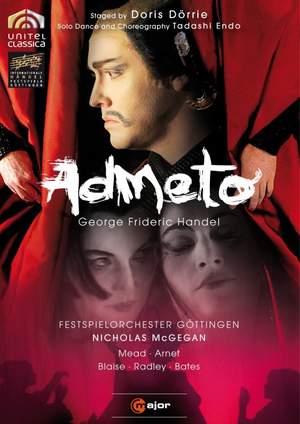 McGegan conducts the Festival Orchestra with a sure sense of style and no exaggerated stylisation...[Dörrie] has succeeded in creating a distinctive setting, satisfying the eye and yet allowing... — Gramophone Magazine, Awards Issue 2010 More…

When one of Germany’s most famous filmmakers and stimulating operatic directors focuses her creativity on a rarely performed Handel opera, the result is a “mixture of dancers and singers, comedy and pathos” (The Times). “Admeto”, one of Handel’s most popular operas in his lifetime, was premiered in London in January 1727. Doris Dörrie, whose Japan-inspired feature film “Cherry Blossoms – Hanami” was a major German box-office hit and won several international awards, returns to her beloved Japan in this production. Flowing robes, translucent panels and the participation of Japan’s Mamu Dance Theater and ist choreographer/dancer Tadashi Endo add an evocative dimension to the work whose lead roles were written for a popular castrato and two rivaling primadonnas. Sensitively directed for video by Agnes Méth, who worked with Dörrie on Mozart’s “La finta giardiniera” at the Salzburg Festival (available as part of the M22 cycle by UNITEL), the opera is played by Nicholas McGegan’s FestspielOrchester Göttingen on period instruments. For this production, a coproduction of the Internationale Händel- Festspiele in Göttingen and the Edinburgh International Festival on the occasion of the 250th anniversary of Handel’s death, Doris Dörrie was awarded the Edinburgh Festival’s prestigious Herald Angel Award.

For Handel´s Admeto, Oscar® nominated film director Doris Doerrie – winner of the 2009 Edinburgh International Festival´s prestigious Herald Angel Award – returns to her beloved subject of Japan. In vividly coloured and brilliantly realized set pieces, one of Handel´s most popular operas receives a stunning transformation into the stylish ritualized world of samurai culture. “It´s brilliantly played by the period-instrument FestspielOrchester Goettingen, conducted with fine sensibility and sensuality by Nicholas McGegan” (The Times). “In Doerrie´s production … 200 minutes of music fly by” (The Times)

McGegan conducts the Festival Orchestra with a sure sense of style and no exaggerated stylisation...[Dörrie] has succeeded in creating a distinctive setting, satisfying the eye and yet allowing the music to speak for itself from its due place at the centre.