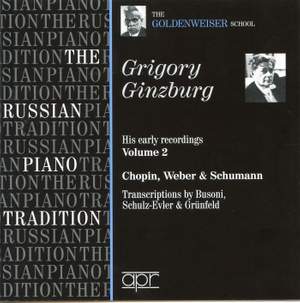 Ginzburg was among the greatest of all Soviet virtuosos. His multi-faceted pianism is everywhere evident here — BBC Music Magazine, July 2010, 3 out of 5 stars More…

Busoni: Toccata and Fugue in D minor (after Bach BWV 565)

Grigory Ginzburg (1904-1961) was perhaps the most astounding virtuoso to emerge in Soviet Russia and it is a tragedy that he was never allowed to travel to the west after the mid 1930’s. He focussed his repertoire very much on the 19th century Romantic period and, above all, in Liszt, and his prolific recordings include many of Liszt’s virtuosic opera paraphrases that had fallen into neglect. This CD is the second of two devoted to his earliest 78rpm recordings mainly dating from around 1950. These discs are extremely rare and many of the performances included will be unknown to even the most ardent collectors. Of particular interest to pianophiles will be his supremely elegant Strauss transcriptions and the Schumann arrangements of Paganini Caprices.

Ginzburg was among the greatest of all Soviet virtuosos. His multi-faceted pianism is everywhere evident here

...you are made aware of a pianist who wore his character or originality lightly rather than heavily, a pianist of thoughts and dreams rather than superannuated virtuosity. He weaves his way with imperturbable ease through every decadent intricacy.