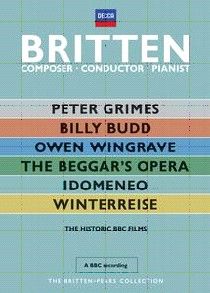 Purcell: Man is for the woman made (from The Mock Marriage, Z605)

trad.: Sally In Our Alley

These are historic 60s & 70s BBC films, long locked away in the BBC archive.

When released on DVD in 2008 and 2009, this was their very first availability to the consumer.

They have been carefully restored by the BBC Restoration Unit, so are in the best possible visual and audio condition.

They include several key and unique performances of Peter Pears, which were not filmed anywhere else (notably as Grimes, and also as Captain Vere in Billy Budd).

The Owen Wingrave was the original version of this 'written for TV' opera, and so definitive in respecting the composer's wishes.

The legendary black-and-white film of Billy Budd was long thought to be lost, until Decca unearthed an error in the BBC Tape Library entry.

The Billy Budd was one of the three Gramophone DVD nominations in 2009.