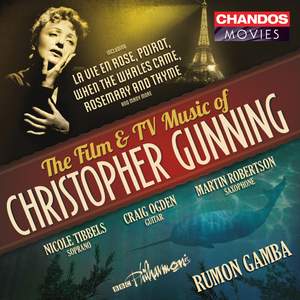 Offer, The Film and TV Music of Christopher Gunning

Gunning does not play things too safe. A bold and original composer, he creates drama and tension through interesting tone and tempo changes, unexpected notes that twist the listener's expectations... — Classic FM Magazine, February 2011, 4 out of 5 stars More…

Gunning: The Rosemary and Thyme Caprice

Gunning: When the Whales Came

Christopher Gunning is perhaps most famous for his music for the TV series Poirot, but his career in film and TV music stretches back some forty years. In his twenties Gunning composed the music for several documentary films and also worked as an arranger, providing the backings for a wide variety of recording artists, including Mel Tormé, Shirley Bassey, The Hollies, Colin Blunstone, and the saxophonist Phil Woods. At the same time he composed the music for a lot of advertising campaigns, some of them long-running, such as those for Martini and Black Magic.

Gunning has spent the greater part of his career writing television and film scores for productions that vary in character from period pieces to contemporary drama, many of which are represented on this disc. He has won four BAFTA awards, for La Vie en rose, Agatha Christie’s Poirot, Middlemarch, and Porterhouse Blue, and three Ivor Novello awards, for Rebecca, Under Suspicion, and Firelight. His scores for The Big Battalions, Wild Africa, Cold Lazarus, When the Whales Came, and Winalot have also received nominations for BAFTA and Ivor Novello awards, and his music for the Martini advertising campaign, heard around the world for thirty years, has won three Clio awards. His most recent film commission was the score for La Mome Piaf, also known as La Vie en rose, the feature film starring Marion Cotillard as Edith Piaf and directed by Olivier Dahan. In February 2008, he was presented with the BAFTA award for Best Music and on the same night, La Vie en rose won another three BAFTA awards, including one for Marion Cotillard as Best Actress, who went on to win an Oscar for her performance.

More recently, Christopher Gunning has been devoting much of his time to composing music for the concert hall. His output includes concertos for the oboe, clarinet, saxophone, and piano, and five symphonies for large orchestra. His latest recording, of Symphonies Nos 3 and 4 and the Concerto for Oboe and String Orchestra, was released in May 2009 on Chandos (CHAN 10525).

The Film and TV Music of Christopher Gunning is performed by the BBC Philharmonic, under the British-born conductor Rumon Gamba who records exclusively for Chandos. It also features exquisite performances from a number of soloists with whom Gunning has worked over the years: the saxophonist Martin Robertson, soprano Nicole Tibbels, and guitarist Craig Ogden whose many recordings, including more than half a dozen for Chandos, have received wide acclaim. His debut solo album led the magazine BBC Music to dub him ‘a worthy successor to Julian Bream’, and it was also nominated for a Grammy award. He is today widely heard on BBC Radio 3 and Classic FM.

Gunning does not play things too safe. A bold and original composer, he creates drama and tension through interesting tone and tempo changes, unexpected notes that twist the listener's expectations and a keen ear for the emotional qualities of every instrument he selects. The BBC Philharmonic serves him well, drawing out all the music's colours.

Gunning has an uncanny knack of unlocking character, time and place in his film and TV scores...with the BBC Philharmonic on board under Rumon Gamba's direction, the performances are immaculate and idiomatic.

the music itself is so good and so well orchestrated...that my attention was held throughout...The scores for Under Suspicion and Cold Lazarus...are quite masterly in their evocative power and instrumentation.