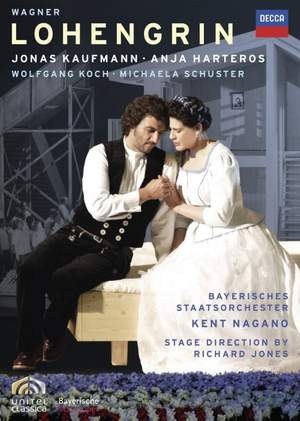 Without question, the musical performance is very good, and in the case of the title role, sung by Jonas Kaufmann, I would say it is perfect, and easily the best account of this tricky role I... — BBC Music Magazine, September 2010, 4 out of 5 stars More…

Jonas Kaufmann’s sensational role debut as Wagner’s Lohengrin was the talk of the 2009 Munich Festival.

Filmed in high-def widescreen, Jonas Kaufmann’s bow as Lohengrin is a logical follow-up to the success of his German arias album (4781463), described by Hugh Canning in International Record Review as “one of the vocal records of the year [2009], if not the decade”

Partnered by Anja Harteros – per The Opera Critic, “an exceptional Elsa” – Kaufmann heads a stellar cast conducted by Kent Nagano

Without question, the musical performance is very good, and in the case of the title role, sung by Jonas Kaufmann, I would say it is perfect, and easily the best account of this tricky role I have ever heard. Kaufmann is also noble-looking, handsome and acts with natural grace and conviction...Kent Nagano is the often inspired and at all times fine conductor.

Richard Jones's and designer Ultz's stage, set in the 1930s, shows an autocratic country where the law is preluded by military fanfares and announced by a single speaker (the Herald). The young cast is led superbly by Jonas Kaufmann and Anja Harteros.

This is the Lohengrin voice of dreams; both romantic and heroic, with a gentle, well-nourished warmth, capable of a perfectly graduated diminuendo...a major contribution is no doubt made by Kent Nagano's sympathetic conducting and the fine playing of his Munich orchestra.

Nothing clutters Jones’s focus on the opera’s heart...When Kaufmann’s tenor dips to pianissimo for the Grail narrative, we’re putty in his hands. Physically noble and charismatic, subtly acting and interacting, he’s never a star on a pedestal...Nagano adopts a refreshingly temperate approach, avoiding juggernaut blasts but delighting in details and phrasing.