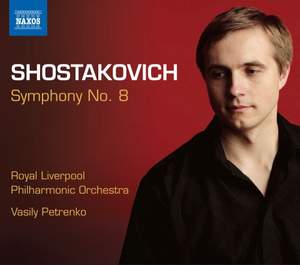 The way Petrenko follows the finale's course away from its central confrontations towards its exhausted, wary truce rings as true as in any recorded version I can recall. So there are the makings... — Gramophone Magazine, August 2010 More…

A third of a century after his death the symphonies of Dmitry Shostakovich have moved to the absolute centre of the repertoire.

Written during World War II, the unusually constructed Eighth Symphony is a powerful work built on striking contrasts between music which is at times unremittingly bleak and at others brutally intense.

The predominantly slow opening movement, punctuated by a terrifying central crescendo, is followed by a scherzo of savage parody. At the heart of the Symphony a second fast movement builds remorselessly to a shattering climax over pounding timpani. The rapt, largely introspective fourth movement, Largo, leads straight into the last movement, Allegretto, which seems to reach out for hope in an uncertain world.

The way Petrenko follows the finale's course away from its central confrontations towards its exhausted, wary truce rings as true as in any recorded version I can recall. So there are the makings of a great interpretation here, and at bargain price the disc is clearly recommendable.

Petrenko confirms his credentials as perhaps the outstanding Shostakovich interpreter among the younger generation of Russian conductors with this expansive and penetrating account...This is a bargain version to stand beside the best that money can buy and an ideal introduction to one of Shostakovich’s most shattering scores.

...a magnificent, penetrating performance...Petrenko inspires the RLPO to a manner of playing and a level of emotional involvement of extraordinarily potent atmosphere, strength and poignancy...The performance is gripping and has all the hallmarks of a best-seller.