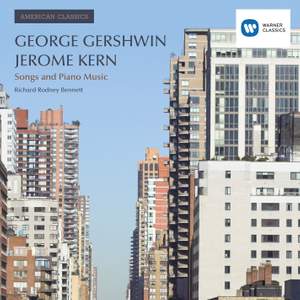 Gershwin: Two Waltzes in C (from Pardon my English)

I'll build a stairway to paradise

The man I love

My one and only

Strike up the band

Liza (All the clouds'll roll away)

Kern: Smoke gets in your eyes

Arguably the best-known of all 20th-century composers, George Gershwin's music encompasses with equal skill both the classical and popular genres. He was born Jacob Gershowitz in Brooklyn, New York City, in September 1898 to immigrant Jewish parents. He died at the early age of 38 from a tumour in the brain.

Gershwin started to show an interest in music from about the age of ten and, although receiving some piano tutelage, was largely self-taught in composition. It was only later in his career that he received some formal instruction in composition.

Gershwin's first employment was as a song plugger for a New York music publishing company. His first song was published in 1916 and a year later he had his first commercial successes with the rag Rialto Ripples. This was followed, in 1919, by his first big international hit, Swanee. Now established as a successful composer of popular songs, between 1919 and 1933, Gershwin produced, in collaboration with his elder brother Ira, some of the most successful Broadway musicals.

In 1924 he was commissioned by the band leader Paul Whiteman to produce what was to be his first 'serious' composition, the Rhapsody in Blue. This was followed a year later by the Piano Concerto in F and, in 1928, by An American in Paris. His opera Porgy and Bess was first performed on Broadway in 1935.