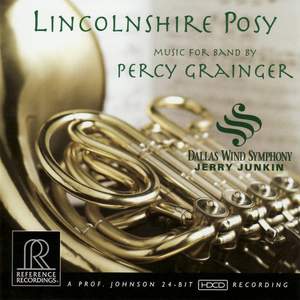 played with appropriate gusto but also, where required, delicacy of spirit by the Dallas Wind Symphony under Jerry Junkin. — MusicWeb International

Grainger: 'The Duke of Marlborough' Fanfare

Grainger: Children's March 'Over the Hills and Far Away'

Grainger: The Lads of Wamphray March

Australia considers Grainger its greatest composer; the U.S., where he lived most of his life, praises him as a music educator, composer and arranger of band music; and England considers him supremely important in the preservation and arrangement of British folk songs.

Grainger’s gems are performed to perfection by America’s only full-time professional wind band, conducted by Jerry Junkin. Grainger specified many unusual, optional instruments, and this recording has them all.

played with appropriate gusto but also, where required, delicacy of spirit by the Dallas Wind Symphony under Jerry Junkin.