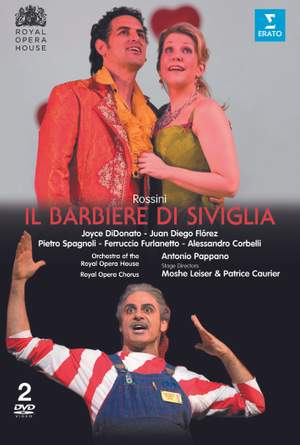 Juan Diego Florez is the Almaviva of one's dreams, vocally and musically impeccable...and an actor of enormous charm and intelligence, whilst in the title role Pietro Spagnoli offers warmth and... — BBC Music Magazine, August 2010, 5 out of 5 stars More…

The American mezzo sings an astonishing Rosina from a wheelchair after breaking her ankle on the opening night of Covent Garden’s production, with Juan Diego Flórez as her suitor Count Almaviva and Pietro Spagnoli as the eponymous Spanish barber.

This DVD is in fact the "break a leg" version which sees Joyce DiDonato perform her role in a wheelchair - a story which has occupied international headlines last year - and definitely a DVD which will stand out. The DVD will include bonus features like an interview with Joyce on her stage accident and subsequent wheelchair performances.

Captured at London’s Royal Opera House with an unbeatable cast in a sparkling, colourful production, this Barbiere offers a unique dramatic twist: Joyce DiDonato, who had broken her leg on the first night of the run, insisted on performing. As she said : ”Being trapped in the wheelchair was a quite literal way of demonstrating Rosina's huge desire to break free.”

“The Royal Opera's cheerful and colourful new production of Rossini's most popular work is a copper- bottomed hit.”

With its unbeatable line-up of singers and conductor, last summer’s Il barbiere di Siviglia at London’s Royal Opera House was always going to hit the musical headlines ... but it ended up making news around the world when the leading lady, Joyce DiDonato, broke her leg on the first night. Undaunted, and still singing with her usual brilliance, DiDonato heroically completed the performance. She then went on to appear in the entire run, wearing a bright pink plaster cast on her leg and whizzing around the stage in a wheelchair.

Virgin Classics, already scheduled to record the production for DVD, thus captured a Barbiere unlike any other.

This was how The Guardian reported the story:

“There is a moment … when Rosina complains that she has cramp in her foot – and the line has never seemed more appropriate than this week at Covent Garden. Joyce DiDonato … would have achieved wonderful reviews for her voice alone: luscious and clear, with a freshness that filled the theatre. It was as good a performance as anyone could remember … but the event that made it extraordinary occurred during the first act on the opening night. DiDonato slipped, hurting her ankle, and sang for the next three hours supported by a crutch. It turned out to be a fracture, but rather than withdrawing from the show she pressed on, singing and acting largely from a wheelchair.

“Whirling about the stage, with a bright pink plaster cast on her leg, her predicament seemed fitting for her character, who is supposed to be imprisoned at home by her guardian … DiDonato wrote that ‘being trapped in the wheelchair was a quite literal way of demonstrating Rosina's frustration and huge desire to break free’ … The rest of the cast was spectacular, too …. If, when the production is revived, Rosina appears on the stage without a wheelchair decorated with a big ribbon, it will seem as if something has gone wrong.”

The Independent made clear that, for all DiDonato’s verve and virtuosity in the face of adversity, this was no one-woman show: “Rossini's Barbiere is packed with showstoppers; but when did we last see it cast at such strength, sung with such tongue- and vocal cord-twisting relish, and conducted with such panache that every number did just that – stopped the show? Answer: the current revival of Moshe Leiser and Patrice Caurier's wild and wacky staging at the Royal Opera House. They must have added a quarter of an hour to the running time in applause.”

Juan Diego Flórez lived up to his reputation as the world’s star bel canto tenor: “Flórez is in amazing form: his runs brilliantly etched, his tone glinting, his top notes seemingly effortless. He held his brilliant final B flat without a quiver of insecurity for what seemed like half a minute,” (The Times), while as the eponymous energetic barber, Pietro Spagnoli delivered Figaro’s numbers “with panache and impressively meaty tone” (The Times). The villains of the piece were not to be outdone: “the expert Alessandro Corbelli showed how much comic fun can be had with crusty old Doctor Bartolo, and Ferruccio Furlanetto, booming like a rumbling thunderclap of doom and gloom, made a wicked caricature out of Don Basilio.” (Financial Times)

As for the all-important contribution of the Royal Opera House’s Music Director: “Musically … it was bliss … There is thoughtfulness as well as brilliance in Antonio Pappano's conducting, which gives us greater emotional resonance than usual in this work without diluting its abrasive comedy,” said The Guardian.

The DVD also includes a bonus interview with Juan Diego Flórez, Antonio Pappano, Moshe Leiser and Patrice Caurier and Joyce DiDonato, talking about her role as Rosina and about her career. She has received the highest praise for her recent Virgin Classics recital of Rossini, ‘Colbran, the Muse’: “DiDonato's trills are flawless, her Italian is always precise, and her theatrical sense is magnificent. Musically and dramatically, the disc is perfection.” (Opera News)

Juan Diego Florez is the Almaviva of one's dreams, vocally and musically impeccable...and an actor of enormous charm and intelligence, whilst in the title role Pietro Spagnoli offers warmth and personality to spare...Patrice Caurier and Moshe Leiser's production, a blend of ancient and modern visuals, matches the music-making perfectly.

Antonio Pappano's conducting brings back the genuine Italian frisson of sprung rhythms, banda-like colour and prominence of wind and brass, and real tension (but lack of fake hurry) in crescendos. The singing here, and its ornamentation, operates on a high level indeed, much aided in naturalness by the conducting...All in all, the evening is a musical triumph.