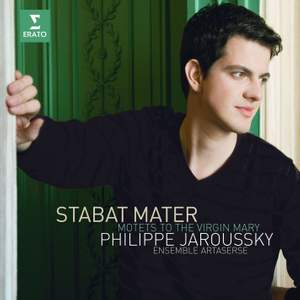 [Jaroussky] creates magical contrasts between full voice and restrained tone...Clearly recorded recorded, if a touch closely, in a beautiful church acoustic, this is a most attractive disc of... — BBC Music Magazine, August 2010, 4 out of 5 stars More…

"Philippe Jaroussky is one of the best countertenors around. His voice is mellow, evenly toned, wide-ranging and largely free from intrusive mannerism and vocal strain”

Unsurprisingly, it is in the music of the Baroque era – the heyday of the castrato – that French countertenor Philippe Jaroussky has captured the attention of music-lovers lovers around the world. The ethereal, but sensuous beauty of his voice, his virtuosity and his sense of style have brought him critical praise, a number of major awards – including, in 2008, Germany’s prestigious Echo-Klassik prize for Male Singer of the Year,

Here Philippe Jaroussky, offers selection of motets dedicated to the Virgin Mary, composed in the 17th century by Italian composers. Although the majority of these composers were very famous at their time, their works are today quite unknown, and very rarely, if never, recorded. The central piece is Giovanni Felice SANCES’ “Stabat Mater dolorosa”: the longest (10-11’), considered a masterpiece of the times, and a thoroughly poignant work.

[Jaroussky] creates magical contrasts between full voice and restrained tone...Clearly recorded recorded, if a touch closely, in a beautiful church acoustic, this is a most attractive disc of refreshingly new repertoire

His angelic counter-tenor is set to the warm, cossetting accompaniment of an early-music ensemble prominently featuring viola da gamba, organ and harpsichord...but Jaroussky is the star.

Jaroussky’s agility in the virtuoso alleluias of Rigatti’s motet is a thing of wonder...His is a beautiful voice, pure, limpid, full-toned and backed up by mature interpretative intelligence and expressive feeling. Words matter in this music, and Jaroussky’s emotional responses are consistently illuminating.

No counter-tenor beats Jaroussky for pure, elegant soprano tone...If the subject matter never alters, the moods show much variety. He grieves with Mary beside the cross; he rejoices with alleluias; he worships on bended knee...For lovers of the esoteric and refined.