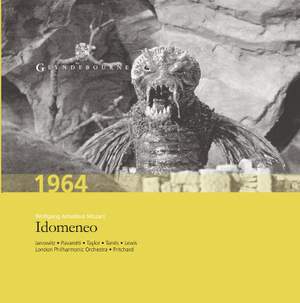 ...the most attractive and characterful singing on this recording comes from Richard Lewis in the title-role. A singer of great versatility and with a most appealing voice, he has been scandalously... — BBC Music Magazine, June 2010, 3 out of 5 stars More…

Mozart is very much Glyndebourne’s signature composer and as a point of fact Glyndebourne was instrumental in putting Mozart back into the repertoire in the UK, so much so that the performing edition of Idomeneo was commissioned by Glyndebourne’s music director Fritz Busch. Glyndebourne’s 1951 Messel production of Mozart’s Idomeneo was the first professional performance in Great Britain. This 1964 recording is from the last staging of the Messel production and an opera John Pritchard had conducted at Glyndebourne since 1952. Pritchard was a consummate Mozartian and this recording allows, for the first time, Janowitz and Pavarotti to be heard before their respective international careers took off. Their vocal timbres are instantly recognisable - fresh, vital, flexible and already burgeoning with a distinctive projection of the text and drama. Pavarotti went on to have a long association with this opera, moving to the title role at the Metropolitan Opera in New York and recording it in the early digital age of 1983 with the Vienna Philharmonic Orchestra conducted once again by Pritchard. Richard Lewis as Idomeneo in the recording has a gracious sense of style and carries the day.

In the past (10+ years ago) there have been pirated/bootlegged releases of this production taken from a BBC off air recording. This release is from Glyndebourne’s own archive and is NOT the previously available BBC performance.

“Of the newcomers to the cast, 27-year-old Gundula Janowitz, of the Vienna State Opera, created an immediate impression as the captive Princess Ilia. She is the possessor of a lovely soprano voice, crystal clear and even over its entire range. Her phrasing is beautifully executed and she has, in addition, a charming stage presence.” Daily Mail, July 1964

“This has always been one of John Pritchard’s favourite pieces…he inspired the orchestra and chorus to some of the best playing and singing they have given us this season.” The Observer, July 1964

...the most attractive and characterful singing on this recording comes from Richard Lewis in the title-role. A singer of great versatility and with a most appealing voice, he has been scandalously under-rated and this is a fitting tribute to him at his peak.

Richard Lewis owned the title-role for two decades at Glyndebourne, and realises much of the king's nobility and anguish...[Pavarotti] produces some thrilling, ringing tone, and uses the text more keenly than any of the other principals. He is incontestably the highest-testosterone Idamante on disc.