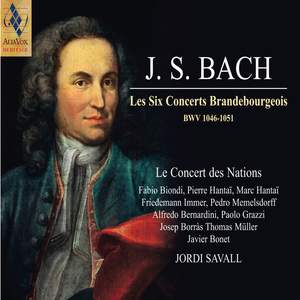 (The original manuscript's title is in French.)

With star-soloists including Fabio Biondi & Pierre Hantaï this double album, recorded in 1991, is a landmark in Bach’s discography (as all other Bach /Savall recordings, by the way...). The orchestra Le Concert des Nations sounds richer than ever and, as you have come to expect from Alia Vox, this reissue is also a luxury masterly-remastered double digipack. There are many other versions of the Brandenburg Concertos but Alia Vox would like to underline that Jordi Savall's recording is regarded as the best recording ever made. In the December 2009 issue of the French magazine Classica, this album was chosen as the THE recording of the Brandenburg Concertos.