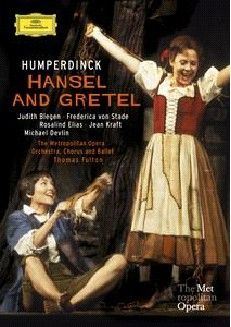 traditional but lively — BBC Music Magazine, October 2010, 4 out of 5 stars

This classic Met production “cheerfully evokes a magic world of woodland sprites and candy dreams,” wrote the New York Post reviewer, praising Elias’s “broadly comic witch,” Blegen’s “merry and nimble” Gretel, and von Stade’s “vocal majesty and dramatic integrity” as Hansel. “Even the sourest Scrooge or Grinch,” said the New York Times, “would have to smile when the witch is bested (and basted) and the stage suddenly fills with her revived victims: a beaming bevy of children in dapper folk-tale costume.”