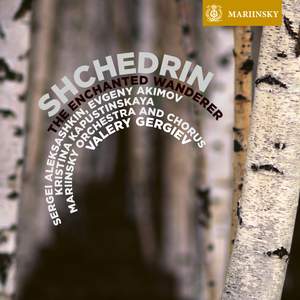 The Mariinsky's stalwart bass Sergey Aleksashkin is sonorous in the title part, alongside the high tenor Evgeny Akimov in several roles and the dusky-voiced mezzo Kristina Kapustinskaya as the... — BBC Music Magazine, May 2010, 5 out of 5 stars More…

Shchedrin: The Enchanted Wanderer, Part I

II. The Flogged Monk (The Portent)

III. The Prince's Engagement to a Wealthy Bride and Monologue of Ivan

IV. Ships on the Volga

Shchedrin: Four Fragments from the Ballet "The Little Humpbacked Horse"

II. Duettino of Ivan and the Tsar Maiden

IV. Maidens' Round Dance and Quadrille

Following works by Shostakovich and Tchaikovksy, the Mariinsky label turns to music by one of Russia’s greatest living composers for its fourth release. Shchedrin’s ‘concert opera’ The Enchanted Wanderer was premièred in New York in 2002 and did not receive its Russian premiere until 2007. However it has rapidly entered the Mariinsky Theatre’s repertory both in St Petersburg and on tour. Based on a story by the 19th-century Russian author Nikolai Leskov, the opera is steeped in Russian folklore and beliefs. The release also features four fragments from Shchedrin’s 1955 ballet score The Little Humpbacked Horse and his 1963 Concerto for Orchestra Naughty Limericks.

Notes in Rusian, English, French and German libretto in Russian with English translation

The Mariinsky's stalwart bass Sergey Aleksashkin is sonorous in the title part, alongside the high tenor Evgeny Akimov in several roles and the dusky-voiced mezzo Kristina Kapustinskaya as the haunting Grusha. Even on a recording she has subtle histrionic magnetism to match her vocal security

Whatever the intrinsic strengths or weakness of his music, [Shchedrin's] loyalty to those values [of indigenous Russian culture] represents a significant strand in late-Soviet and post-Soviet culture. On that basis...these finely executed and recorded CDs can be counted as an important document.