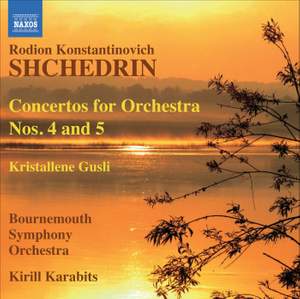 It is above all [Shchedrin's] ear for orchestral colour that dominates...[his] gift ensures that the ear is constantly beguiled...Karabits and the Bournemouth Symphony Orchestra do brilliantly... — Gramophone Magazine, August 2010 More…

Shchedrin: Concerto for Orchestra No. 4 'Khorovody'

All three works on this disc are world première recordings.

This disc marks the start of a long collaboration between Naxos and the Bournemouth Symphony Orchestra’s new young Ukranian conductor, Kirill Karabits.

The distinguished Russian composer, pianist and teacher Rodion Shchedrin writes: “I spent my childhood in the small Russian town of Aleksin, situated on the river Oka, 300 kilometres south of Moscow. When I was growing up, purely entertaining, commercial music was not yet as ubiquitous as it is now… It was still possible to hear choral songs, the sound of the accordion, the strumming of the balalaika, funeral laments, the cries of shepherds at dawn, coming from beyond a river, enveloped in fog. All that distant and now extinct musical atmosphere of a Russian province is strongly etched in my childhood memories. I think, in all three compositions on this CD, it has found it own nostalgic echo.”

“Karabits demonstrated an impressive, riveting range of sensibility and sensitivity to musical style… The Bournemouth Symphony Orchestra was on top form and receptive to his interpretative ideas.” Concert review by The Daily Telegraph

It is above all [Shchedrin's] ear for orchestral colour that dominates...[his] gift ensures that the ear is constantly beguiled...Karabits and the Bournemouth Symphony Orchestra do brilliantly with it all, and so, crucially, do the recording engineers in capturing all the delicate and original sounds.