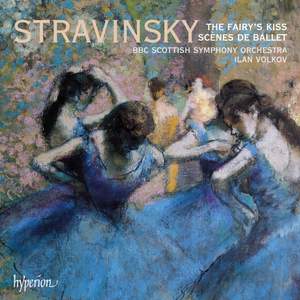 What a joy...to hear a conductor with the right instinct for tempo co-ordination and continuity...If only there were more truly sympathetic conductors out there such as Volkov to observe Stravinsky's... — BBC Music Magazine, June 2010, 5 out of 5 stars More…

Scene 4. Epilogue. Lullaby in the land of eternity. L'istesso tempo

A second disc of Stravinsky’s ballet music from the BBC Scottish Symphony Orchestra and Ilan Volkov, this time featuring the composer’s fascinating recreation of the music of Tchaikovsky.

Stravinsky’s advocation of the - then unfashionable - music of Tchaikovsky was well-known: he was a public champion of the composer over the Russian ‘nationalists’ such as Rimsky-Korsakov. In 1928, Stravinsky was commissioned by Ida Rubinstein to compose a ballet for her company’s season which was based on music by Tchaikovsky. Stravinsky probably envisaged a set of free orchestrations, but the music seems to have taken over and dictated its own terms, with the result that Stravinsky soon found himself entangled in a complex recreative process, and having to compose day and night to get the work completed in time for the first performance, never mind the early deadline. The result - The Fairy’s Kiss - is a complex and highly original masterpiece. As a whole the outcome is wonderfully disconcerting, and brilliantly challenges our perhaps too comfortable way of listening to late romantic music.

Scènes de ballet is in its way another ‘recreation’ - a ballet ‘after Giselle’ written for performance on Broadway in 1944. Stravinsky devised a semi-abstract scenario with vague allusions to Giselle among other nineteenth-century ballets; and then proceeded to compose, as it were, ‘away from’ such models, to the extent that his music constantly suggests their ethos and formulae but always through a neoclassical prism and without direct quotation.

What a joy...to hear a conductor with the right instinct for tempo co-ordination and continuity...If only there were more truly sympathetic conductors out there such as Volkov to observe Stravinsky's frequent cantabile markings, more listeners might come to love these strange exotic birds.

[Scènes de ballet] The score is attractive American-period Stravinsky before he moved towards serial techniques. Apart from the vivid sound quality, the balance in the new recording is much better with details such as the piano much clearer … This is an attractive coupling in Hyperion’s admirable
ballet series, produced with its usual finesse

Ilan Volkov and his former orchestra continue their survey of Stravinsky's ballets for Hyperion by juxtaposing one of the slightest of his dance scores with one of the most substantial...The BBC Scottish Symphony Orchestra plays wonderfully well for their departed chief conductor

In the wrong hands, The Fairy’s Kiss can sound prolix when performed without the attendant choreography and scenery, but Volkov has a sure ear for the ballet’s momentum, colour and dynamism, and the BBC SSO plays it with precision and eloquent character.