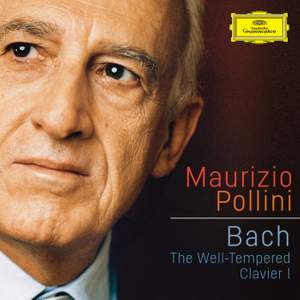 While Maurizio Pollini is not well known for his performances of Bach's music he is no stranger to it...His view of the music is almost invariably lyrical and often expressively intense...In... — BBC Music Magazine, May 2010, More…

Maurizio Pollini, a living legend of piano, records the benchmark repertoire of the Well-Tempered Clavier for the first time in his storied career. Thus, this album is an event – a summit meeting of masters.

Despite having played the Well-Tempered Clavier in concert halls for more than twenty years, Pollini intensively restudied the music before consenting to record it. His humility and dedication result in a transcendent performance that is less an interpretation than a revelation.

Hugely popular in its own right, as a Pollini project the Well-Tempered Clavier will excite critics and his fan base alike as a crown jewel of the Bach discography on any label.

While Maurizio Pollini is not well known for his performances of Bach's music he is no stranger to it...His view of the music is almost invariably lyrical and often expressively intense...In short there is nothing mechanical, perfunctory or bland, and my sensibilities were often touched by playing that is untainted by reverence.

Close listening reveals minute changes in tone colour, subtle and strategic deployment of the piano's una corda pedal, plus long phrases and fugal textures that have beginnings, middles and ends but no dead spots.

There is patrician pianism here: the arpeggios of the opening C major prelude have the limpidity one associates with his celebrated Chopin, and he digs deep to give emotional weight to the long preludes...This is vintage Pollini

Predictably, there's much to admire in Maurizio Pollini's first Bach recording: the sovereign authority projected through every bar, the sense of balance and aristocratic detachment, the perfect weight of tone.