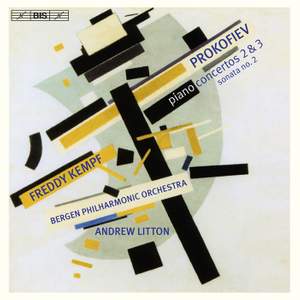 With this disc, Freddy Kempf shoots straight into the top ten of Prokofiev interpreters...[He] keeps it all spruce and plays it relatively straight...The big Rachmaninov tune in the finale [of... — BBC Music Magazine, May 2010, 5 out of 5 stars More…

Freddy Kempf’s 2003 Prokofiev solo recital was described as ‘a superb disc’ in Gramophone, whose critic went on to write: ‘Kempf is joyfully exuberant, flashing through every savage challenge with the assurance and instinct of a born virtuoso.’

Kempf, Litton and the Bergen PO now join forces in an all-Prokofiev programme that includes the most popular of his five piano concertos, namely the Third, a spontaneous work, vigorous and melodic in turns and full of striking material presented in a typical Prokofiev manner. This is coupled with the Second Piano Concerto, which Prokofiev himself premièred in 1913, shocking the audience with its modernistic sounds and jagged rhythms.

With this disc, Freddy Kempf shoots straight into the top ten of Prokofiev interpreters...[He] keeps it all spruce and plays it relatively straight...The big Rachmaninov tune in the finale [of the Third Concerto] is appropriately grand in the soloist's hands and orchestrally lush.

[In the G minor concerto] Kempf is less flamboyant than some, perhaps seeking to make musical sense of the argument. The second movement is as lithe and scintillating as one might wish.