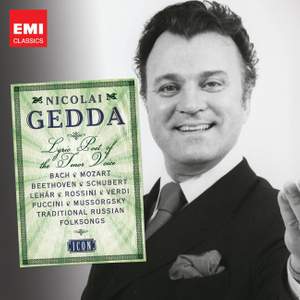 Gedda's standard of vocalisation and his grasp of many styles are uniformly excellent...his humour is always special, as is the technique which sees quite a light voice safely through "Nessun... — Gramophone Magazine, June 2010 More…

Beethoven: Christus am Ölberge, No. 1

Wo die Berge so blau

Rigoletto: La donna e mobile, plus Interview: The beginning of his career and his stage debut

Interview: Formative years and Pinkerton with Callas and Karajan

Harry Gustavus Nicolai Gedda was born in Sweden in July 1925 into a musical home. His father, Mikhail Ustinov, was born in Russia and became choirmaster of the Russian Orthodox Church in Leipzig in 1928, Gedda learned to read music and sang in a children’s quartet; he also became fluent in five languages – speaking Swedish and Russian with his parents and at school he learnt German, English and French. After his family returned to Sweden he continued his singing as a boy soprano.

He did not sing for two years following his voice breaking but then he found, when singing in the bath, that he had developed a light, rather high tenor. Although he had perfect pitch and loved music he did not think of making it a professional career so, on leaving high school, he joined a Stockholm bank. One day a customer, a player in the Royal Opera orchestra, heard him speak about wishing to sing and advised him to call on Carl Oehmann as he was Sweden’s best teacher. Gedda chose Donizetti’s bel canto classic Una furtive lagrima, Oehmann enthused that only the great Jussi Björling had ever sung it so beautifully and duly accepted him as a pupil at the age of 24. After a few months he passed the audition to study for two years at the Royal Conservatory in Stockholm on a musical scholarship.

In 1952, two of his teachers, who were also the conductor and producer of the Royal Opera, decided that he should play the lead in Adam’s Le Postillon de Longjumeau. After two months preparation he made his debut on 8th April and was an immediate success.

News soon reached London of the Swedish sensation and he was given the chance of recording Dmitri in Mussorgsky’s Boris Godunov conducted by Issay Dobrowen and starring Boris Christoff. His prowess was not limited to opera but his highly sensitive light tenor voice was suited to Bach, and Karajan chose him to record the B minor mass in the same year; fifteen years later he was the choice of Klemperer.

He was soon singing major roles in all the top opera houses throughout the world. He was always a highly intelligent artist and he knew his vocal limitations so never took on roles which were beyond his capabilities – he sang Lohengrin but no other Wagner operas for instance. Not that these restrictions caused any lack of repertoire, on the contrary he thoroughly enjoyed the world of operetta and musical songs following his great idol Richard Tauber.

Other great influences were Gigli and Schipa whose lyrical grace and delicacy Gedda always attempted to emulate. He was also the choice of the three leading sopranos – Callas, de los Angeles and Schwarzkopf – for a number of operatic recordings whilst for operetta it was Anneliese Rothenberger.

This collection encompasses all areas of his career and many of his finest recordings, including numerous from his favourite composers, Mozart, Donizetti, Puccini, Bizet and Massenet for operas and Schubert (a complete Die schöne Müllerin) for Lieder.

His talent for languages is covered with German, French, Italian, Russian and English operas or choral works and Lieder in those languages and Norwegian, Swedish, Finish and Spanish. Some of the German light songs and all the Russian Folksings appear on CD for the first time.

Gedda's standard of vocalisation and his grasp of many styles are uniformly excellent...his humour is always special, as is the technique which sees quite a light voice safely through "Nessun Dorma" and the Butterfly duet.