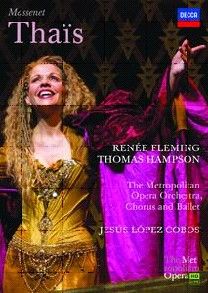 Set in Egypt, Massenet's drama 'Thais' (1894) traces the ill-fated attempt of the monk, Athanaël, to rescue the soul of the celebrated Alexandrian courtesan, Thaïs. Though she is presently living with his wealthy friend Nicias, Athanaël persuades her to renounce her way of life and riches, but as she dies in the desert in a state of grace, he realises he has succumbed to her worldly charms and begs God for mercy.

The first Met staging in over 30 years of Massenet’s Thaïs is released on a starry DVD sure to win this beguiling French opera many new fans.

Renée Fleming is Thaïs to the life. She sings Massenet’s taxing role with the utmost ease and beauty of tone while looking as glamorous as her famous predecessors.

Fleming’s co-star is the great American baritone Thomas Hampson in the role of Athanaël, a part he sings and acts with mastery.

The New York Times lauded Renée Fleming as a “vocally sumptuous and unabashedly show-stealing Thaïs”. If this is crime, opera needs more of it!

Short bonus feature: “Backstage at the Met” with Plácido Domingo (7’52”).

Renée Fleming’s costumes for this production were made by French designer Christian Lacroix.

There is virtually no DVD competition on Thaïs.

'Backstage at the MET', presented by Plácido Domingo, featuring interviews with Fleming and Hampson

This lavish Met production from 2008 plays up the luxurious exoticism of the work to the hilt. Renée Fleming is voluptuous of voice and appearance as Thaïs, looking appropriately ravishing in Christian Lacroix's gorgeous costumes; Thomas Hampson is a sympathetic, three-dimensional Athanaël, catching the conflicts which drive the character like few others.

Do you like fragrant kitsch? Then roll up for this enjoyable DVD of Massenet’s cocktail of sex and piety...Fleming’s creamy trills as the Egyptian courtesan who finds God are almost as luscious as her costumes, designed by the French fashion god Christian Lacroix.