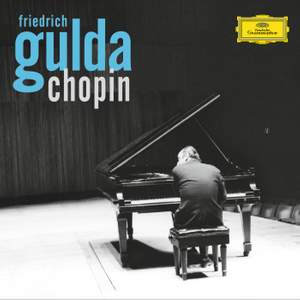 These recordings…are a fitting tribute to his idiosyncratic artistry: immediate, vibrant, original and at times utterly volcanic…he shapes the melodic architecture of the more songful preludes... — BBC Music Magazine, September 2010, 5 out of 5 stars More…

Gulda's hottest Chopin phase was the mid-1950s, when he regularly played the complete Preludes and complete Ballades in concert. Captured here are recordings from a variety of sources, all released for the first time, with the exception of the Piano Concerto recording, made for Decca (with whom he also recorded the Preludes and Ballades)

Performances are sometimes fiercely virtuosic, sometimes dreamily spun-out. The Ballades in particular are carried off with great panache.

First ever releases of 24 Preludes, 4 Ballades and single pieces.

Special compiled improvisation, in which Gulda (among other things) muses over his (broken) relationship with Chopin.

All newly mastered / remastered by Paul Gulda, who writes the liner notes.

These recordings…are a fitting tribute to his idiosyncratic artistry: immediate, vibrant, original and at times utterly volcanic…he shapes the melodic architecture of the more songful preludes with such good sense that you wonder why doesn't everybody do likewise.

Forever the nonconformist, Gulda may sometimes be wilful and irascible but he is never less than mesmeric and fascinating. Time and again he casts a novel and intense light on even the more familiar phrase, making you hang on every note...the sheer mastery and strength are like an elemental force of nature.

There's a freedom to Gulda's approach which brings the music vividly to life, in a manner which would doubtless be frowned upon today – but then, he was the original "terrorist pianist" with a taste for free jazz, who played with Chick Corea.