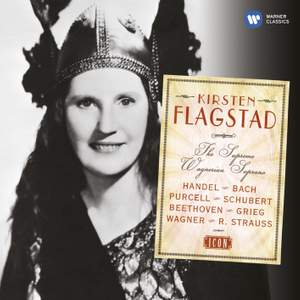 Purcell: Dido & Aeneas: Thy hand, Belinda...When I am laid in earth

This 5-CD set, devoted to the famous Norwegian soprano Kirsten Flagstad, is a further release in the EMI Classics ICON series.

Kirsten Flagstad (1895–1962) enjoyed a successful career singing opera and operetta in Scandanavia, and was considering retirement when she was catapulted to international fame in 1935 after a sensational appearance at the Metropolitan Opera in New York singing Sieglinde, Isolde and Brünnhilde.

From 1935 until her retirement from the stage in 1953 she was the leading Wagnerian soprano of her day. Her powerful, radiant voice and seemingly inexhaustible vocal stamina were ideally suited to the most taxing roles in Wagner’s operas and she was universally acclaimed, especially as Isolde and Brünnhilde. She scored a particular success at Covent Garden and sang there under the three most famous Wagner conductors of the time: Reiner, Beecham and Furtwängler.

The first CD in the set opens with a group of Baroque arias by Handel, Bach, Purcell and Gluck that show off to advantage Flagstad’s superb voice and impeccable musicality. The remainder of this CD consists of Arne Dørumsgaard’s attractive arrangements of classical arias and songs from the collection Canzone scordate.

In her concert repertoire, Flagstad specialised in Norwegian songs and made many recordings of the vocal music of Grieg as well as other Scandanavian composers like Alf Hurum, Ole Bull and Christian Sinding, all of whom are represented on CD 2.

The third CD beings with a group of songs by Schubert, Beethoven, Bridge and Dørumsgaard, after which Flagstad gives a superb account of the five Wesendonck Lieder that Wagner wrote while composing Tristan und Isolde. This CD concludes with Elisabeth’s prayer ‘Allmächt’ge Jungfrau’ from Tannhäuser and ‘Siegmund! Sieh’ auf mich’ in which Brünnhilde tells Siegmund of his forthcoming death in the second act of Die Walküre. Siegmund is sung by the tenor Set Svanholm, who was one of Flagstad’s regular partners in the theatre and on disc.

The remaining two discs include extensive excerpts from Siegfried, Götterdämmerung and Tristan und Isolde, with Set Svanholm as Siegfried and Ludwig Suthaus as Tristan. The complete recording of Tristan und Isolde, conducted by Wilhelm Furtwängler, is considered to be one of the finest opera recordings ever made.