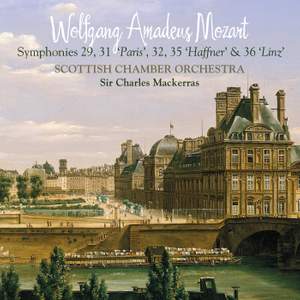 Clarity prevails, and animation. These are the kind of performances that make it difficult for the listener to sit still. One is impelled to pace or even dance around, to gesture and nod...when... — BBC Music Magazine, April 2010, 4 out of 5 stars More…

Recording of the Week,  Mozart Symphonies from Mackerras - Volume 2

The much-anticipated second volume of the Scottish Chamber Orchestra’s Mozart series with their conductor laureate features joyous and life-enhancing accounts of Nos. 29, 31, 32, 35 and 46.

The multi-award-winning partnership of the Scottish Chamber Orchestra and Sir Charles Mackerras is reunited in this second collection of Mozart Symphonies featuring Nos 29, 31 (Paris), 32, 35 (Haffner) & 36 (Linz)’. This much anticipated recording follows on from the astounding success of ‘Mozart Symphonies 38 – 41’ which resulted in him winning the Critics’ Award at the 2009 BRIT Awards and led to ’Mozart Symphonies 38-41’ being named Disc of the Year at the 2009 BBC Music Magazine Awards.

This recording includes both versions of the 2nd movement of the Paris Symphony; unusually Sir Charles requested that the alternative version follows the original, rather than coming at the end of the album as an appendix.

An obsessive musical researcher, Sir Charles merged his considerable knowledge of these works with scores and parts he has been editing from available sources for years for this recording.

Sir Charles Mackerras has won widespread praise for his fresh, vibrant and youthful Mozart performances, which was named the classical recording of 2008 by the Sunday Times and HMV Choice. It also won a 2009 Midem Award for Symphonic Works and a Choc de l’année Award from Le Monde de la Musique.

This recording re-unites the award-winning team, including producer James Mallinson, who has just been nominated for a Grammy award.

Sir Charles Mackerras, the SCO’s Conductor Laureate, has produced numerous award-winning recordings, performed fifty times at the Edinburgh Festival and in 2005 was the first recipient of the ‘Queen’s Medal for Music’.

The Scottish Chamber Orchestra has a large UK-based fan base following performances throughout Scotland and regular appearances at the Edinburgh, St Magnus and Aldeburgh Festivals, the BBC Proms and on BBC Radio 3.

Clarity prevails, and animation. These are the kind of performances that make it difficult for the listener to sit still. One is impelled to pace or even dance around, to gesture and nod...when you are in a get-up-and-go frame of mind, Mackerras is the man, with rhythm and vigour to the fore.

Never less than honeyed in tone, the strings use vibrato sparingly, as a subtle colouring device rather than a wearisome all-purpose wash. Speeds are consistently spritely (but never gabbled), textures are wonderfully clear, wind and brass vibrant.

There's a clarity to the acoustic as recorded in Glasgow's City Halls, which Mackerras uses to his advantage, instinctively bringing out telling inner lines...there's so much to enjoy on these discs - armfuls of wit and humanity...and vivacity aplenty too in the Haffner and Linz.

the Haffner and Linz are magisterial accounts of much-recorded music. Mackerras seems to find exactly the right tempo for each movement — the deliciously witty presto finale of the Haffner goes with irresistible zing — and revels in the festive spirit of the big outer movements

For all their rhythmic life and variety, and the sheer joie de vivre that is so infectious in so much of the playing, Mackerras's interpretations may occasionally be too matter-of-fact and raw-edged for some tastes...though to counterbalance that, it's hard to imagine the final climax of Symphony No 36, the Linz, more conclusively or majestically presented.

Even though the earlier symphonies lack the maturity and startling grandeur of the Prague and the Jupiter, Mackerras manages to wring every last drop from them, and the SCO's glorious playing is enhanced by Linn's admirable recording technique...Highly recommended.

The Haffner is the king of this pack. Mackerras explores its shapes and textures with particular care. Opening and closing movements crackle with electricity. Everything comes stamped with character, intelligence and beauty.