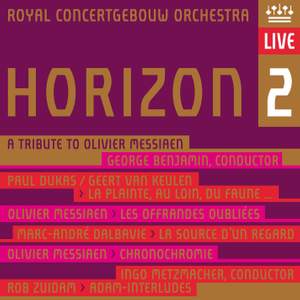 Horizon 2: A Tribute To Olivier Messiaen

These masterly performances under the baton of George Benjamin here provide the focus of the Royal Concertgebouw Orchestra's inventive tribute to the composer, captured live at concerts during... — BBC Music Magazine, February 2010, More…

The Royal Concertgebouw Orchestra focused extensively on Messiaen in its 2007-8 season. A major musical figure of the 20th-century, Messiaen (1908-1992) created an entirely unique musical oeuvre in which such divergent elements as divinity, as it relates to Catholicism and other doctrines, ornithology and the synaesthetic perception of sound as colour are all interconnected with his innovative rhythmic and harmonic musical language and tonal organisation. As a thinker and teacher, Messiaen carried out groundbreaking work in music during the second half of the century, but his work as a composer has remained unsurpassed. During this special season, the Royal Concertgebouw Orchestra programmed works not only by Messiaen himself, but also compositions by his musical predecessors, students and disciples, including three premières of works commissioned by the RCO: Geert van Keulen's orchestration of Paul Dukas's La plainte, au loin, du faune…, Marc-André Dalbavie's La source d'un regard (The Source of a Look) and Robert Zuidam's Adam Interludes.

With this second release in the Horizon CD series, dedicated to contemporary repertoire, RCO Live has captured this resounding homage to Olivier Messiaen in superb five-channel stereo.

These masterly performances under the baton of George Benjamin here provide the focus of the Royal Concertgebouw Orchestra's inventive tribute to the composer, captured live at concerts during his centenary year. A rewarding programme in superb surround-sound.

The highlight of the disc...is Benjamin's coruscating account of what is arguably Messiaen's greatest orchestral work, Chronochromie. Its kaleidoscopes of colours and cascades of birdsong are projected with wonderful vehemence by the Royal Concertgebouw Orchestra.

On this dazzling live programme...the highlight is a stunning rendition of Messiaen's "Chronochromie", its darting dabs of sound and animated percussion packed with startling dissonances and dynamic shifts.

This disc, vividly played, puts Messiaen in context as teacher and inspiration, and makes an aurally stimulating tribute.