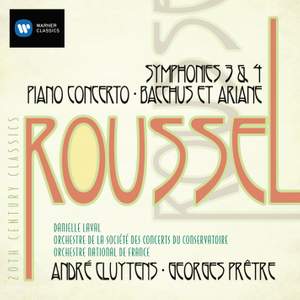 Albert Roussel (1869-1937) was a French composer who spent seven years in the French Navy, only turning to music at the age of 25. He became one of the most prominent French composers of the inter-war period. His earlier works were strongly influenced by the impressionism of Debussy and Ravel, with his later works turning more towards neoclassicism.

This 2-CD set gives us a fairly rounded picture of Roussel's orchestral music, with a selection of important works from every period of his career. If the early pieces reflect the influence of Impressionism (Résurrection) the later works are far more formal in design with strong rhythmic drive (Symphony No.4). Another of Roussel's influences was jazz and this is beautifully illustrated here in the Piano Concerto with its 'bluesy' slow movement.