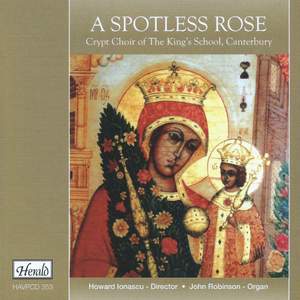 anon.: There is no rose

anon.: The Truth from Above

The King’s School has its roots in the sixth century and its pupils live and work within the inspirational and ancient Precincts of Canterbury Cathedral and the grounds of St Augustine’s Abbey. Music has played a central role in the school’s life from its monastic foundations. The Crypt Choir, under the direction of Howard Ionascu, is the school’s senior choir. Its primary purpose is to provide music for weekly School services in Canterbury Cathedral, where the King’s School is part of the Foundation.

The choir also performs at outside venues, most recently St Paul’s, Knightsbridge, The Temple Church, St John’s, Smith Square and Westminster Abbey. It has toured extensively, including a number of European countries, New York, Boston, New Zealand, Australia and Hong Kong. The Choir reached the final stage of the 2005 BBC Choir of the Year at the Lowry Centre in Salford. In July of that year the Choir was invited to perform Tallis’ Spem in alium alongside The Sixteen and Harry Christophers in Canterbury Cathedral. The Choir has been particularly active in performing contemporary music.

It has performed in the Sounds New Festivals, featuring works by James Macmillan, Paul Patterson and Gabriel Jackson. In December 2005 it gave the first performance of a commission by Howard Goodall, Of the dark past, in Canterbury Cathedral.