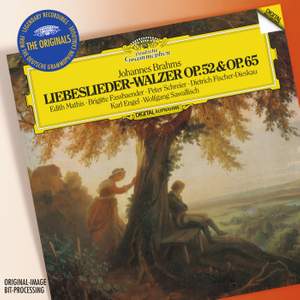 A small masterpiece from 1981: two larger than life accompanists and four top voices of their generation, singing with superb flair - also in the substantial and delectable Three Quartets. — BBC Music Magazine, March 2011, More…

Among the many distinguished recordings made specially by Deutsche Grammophon for its Complete Brahms Edition on LP released for the composer's 150th birth anniversary in 1983, that of the Liebeslieder Waltzes, with its star-studded cast, is one of the finest. It is now available at mid-price for the first time.

"It has taken a while for a recording of Brahms's Liebeslieder Walzer to appear which could justly take its place alongside the 1947 Seefried/Hotter version. Deutsche Grammophon's assembly of Mathis, Fassbaender, Schreier and Fischer-Dieskau is inspired: each voice is of sufficiently bright character to colour many a forgotten detail, yet they work together as true chamber musicians. The rare elegance and stylishness of Karl Engel's and Wolfgang Sawallisch's piano-playing, too, lifts the Op. 52 way above the party pieces these can so often become; they energize the bolder variety of the Op. 65 group, and enhance the word-painting of the three Op. 64 Quartets." Hilary Finch, The Times, London, July 1983

A small masterpiece from 1981: two larger than life accompanists and four top voices of their generation, singing with superb flair - also in the substantial and delectable Three Quartets.

They are surprisingly difficult for the singers, but one would never guess this from the beguiling performances here, with the voices of these four celebrated soloists blending enchantingly and given admirably lilting backing