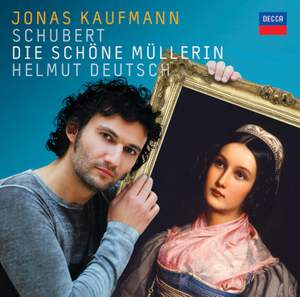 This is easily the most searching and comprehensive account of Schubert's first great song-cycle that I have heard...Kaufmann commands a hypnotic tone which leaves one, as the long last song... — BBC Music Magazine, April 2010, More…

Rising tenor superstar Jonas Kaufmann tackles one of Schubert’s finest song cycles. Kaufmann has established himself as the most successful and versatile tenor of his generation, attracting rave reviews for his live performances and recordings. This new album is his third recital disc on Decca, following his acclaimed debut album ‘Romantic Arias’, followed by ‘Mozart, Schubert, Beethoven, Wagner’.

“He has burst upon the international scene as a fully mature, major artist. And "artist" with Kaufmann means the full deal...” (Gramophone)

This is easily the most searching and comprehensive account of Schubert's first great song-cycle that I have heard...Kaufmann commands a hypnotic tone which leaves one, as the long last song draws to its close, to wish that it could just go on lulling forever.

Probably the most exciting, convincing and moving account of Schubert's Die schöne Müllerin that I've had the good fortune to hear.

Speaking first of voices, I would think that Kaufmann's is the best, certainly the richest, among tenors to be heard in Die Schöne Müllerin on record since Fritz Wunderlich, and of those two he has the more imaginative way of singing it.

I doubt that Schubert’s cycle, purely in vocal terms, has been more thrillingly sung on disc since Fritz Wunderlich...[Kaufmann's] diction and eloquence in German is immaculate [...] This version of Schubert’s masterpiece [is] one of the most compelling in recent years.

One of the greatest accounts of Die Schöne Müllerin on disc...It's big in scale: Kaufmann's soft singing is exquisite, but his voice isn't small and there are moments when he and Deutsch really let rip in their quest for expressive veracity...Not for the faint-hearted, but highly recommended.

an interpretation solidly centred on a simple and powerful emotional arc. Unlike some singers, Kaufmann doesn’t darken the narrative from the beginning, a decision that only enlarges the devastation wrought by the hero’s journey from bliss to despair.

[Kaufmann] scales down his operatic instincts to bring subtle drama to the interior life of the lovesick protagonist, showing exquisite vocal control. Helmut Deutsch is a sensitive partner.