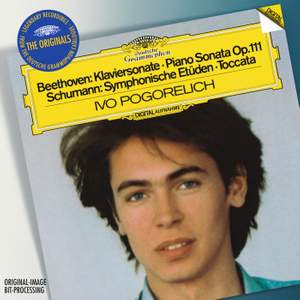 When Ivo Pogorelich was not admitted to the final round at the 1980 Chopin Piano Competition in Warsaw, Martha Argerich resigned from the jury in protest, thereby catapulting the young pianist to immediate worldwide fame.

This new coupling presents part of the debut album of works by Chopin that he recorded shortly afterwards - its centrepiece, the B flat minor Sonata, has already been released on 4636782 in The Originals series - together with his entire second album, which immediately courted controversy with its provocative juxtaposition of Beethoven's timeless mature masterpiece with two of Schumann's most spectacularly virtuoso creations.

"The brilliance, the daring the lofty role-playing in the Schumann, and the many unignorable moments of a rapt and surprising introspection are a sufficient lure [...] Pogorelich's love of the energy and beauty of Beethoven's music is wise enough, vividly and limpidly purveyed" Richard Osborne, Gramophone, October 1983

"[The Beethoven is] quite fascinating for the clarity of execution, every note scrupulously placed, timed and nuanced. The Schumann is, on the whole, probably the most completely sensitive, literally the most appreciative, reading of the work that I can remember." William Mann, The Times Preview, 12.2.1982