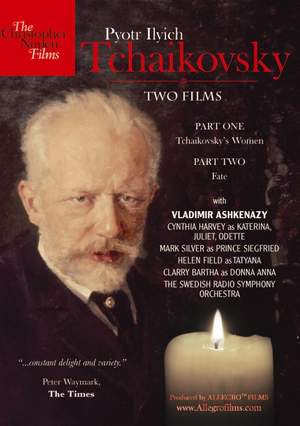 These two pioneering films will both be shown in the second Christopher Nupen season to be broadcast by the BBC on Friday evenings, starting on 15 January. The series will also include the two Sibelius films and his Schubert film, all available on DVD and distributed by Select.

The Tchaikovsky films are unusual in that they do not use actors to represent the composer but are made entirely of Tchaikovsky’s own words and music plus the words of a few of his closest companions. The result gives an exceptionally intimate picture of the inner landscape of Tchaikovsky’s work and artistic preoccupations. They are essential viewing for Tchaikovsky fans.

The first film, Tchaikovsky’s Women (70'15"), looks at the women both in his private life and in his early music. Almost all of his best early work was inspired by deep identification with the plight of his suffering young heroines, an identification so complete that it spilled over repeatedly into his personal life with dramatic consequences: on one occasion leading to attempted suicide. This predeliction began, when Tchaikovsky was 24 years old,

with Katerina Kabanova in The Storm. It continued in full flood with Juliet in Romeo and Juliet, Francesca da Rimini, Odette in Swan Lake and, above all, Tatyana in Evgeny Onegin. All of these young women make appearances in the film.

The second film, Fate (85'35"), looks at Tchaikovsky’s strange relationship with Nadezhda von Meck, the most important attachment of in his life, after his mother, while also following his increasing concern with the idea of fate as a controlling influence in his own life and as a motivating force in his later symphonies. What he did not know, despite all his concern and forebodings, was that fate would overtake him, at the age of 53, more tragically than even Tchaikovsky could have foreseen.

“Christopher Nupen: King of the music documentary” Gramophone Magazine and winner of the Documentary DVD of the Year at Midem in Cannes 2005, 2006 and 2008.

“The master of the music doc.” Norman Lebrecht, The Evening Standard