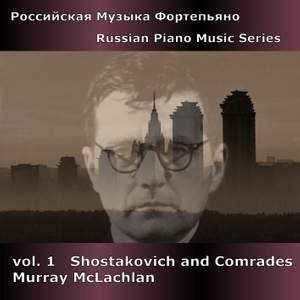 ...pride of place goes to Shostakovich's two Sonatas...McLachlan makes his personality felt in his firm delineation of the piece's architecture and the intense lyricism he brings to its often... — BBC Music Magazine, October 2010, 4 out of 5 stars More…

This release is the first in a projected series exploring Russian Piano Music. This recording gathers together four Russian composers who were contemporaries and also Britain’s leading composerpianist, Ronald Stevenson, who is highly revered by Russian piano scholars (his piece Recitative and Air was commissioned by the Union of Soviet composers, and in fact became an ‘In memoriam’ elegy on the sudden death of the Soviet master).

Of the six featured pieces, those by Myaskovsky, Stevenson and Shchedrin are otherwise unavailable elsewhere in the catalogues. The booklet contains highly informative notes by Murray Mclachlan.

As a concert artist Murray McLachlan has received outstanding critical acclaim for intelligent and sensitive interpretations and superb technical ability. His prolific discography, mostly for Divine Art, Olympia and Dunelm, has received long-standing international recognition and includes over thirty commercial recordings, including the complete sonatas of Beethoven and Prokofiev and many rarities.

Murray McLachlan has given first performances of works by many composers, including Martin Butler, Ronald Stevenson, Charles Camilleri, Michael Parkin and even Beethoven! He is Head of keyboard at Chetham’s School of Music and tutor at the Royal Northern College of Music in Manchester, as well as Artistic Director both of the Chetham’s International Summer School and Festival for Pianists, an event which attracts outstanding musicians annually from all over the world, and the Manchester International Concerto Competition for Young Pianists, which began in 2007.

...pride of place goes to Shostakovich's two Sonatas...McLachlan makes his personality felt in his firm delineation of the piece's architecture and the intense lyricism he brings to its often bare textures.