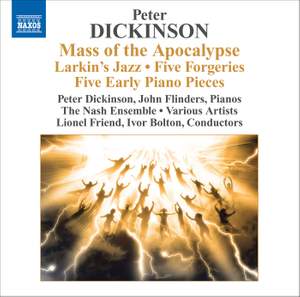 Peter Dickinson - Mass of the Apocalypse

…the Larkin homage, and more particularly the Mass, remain the most substantial work, the latter announced by an all-too-predictable apocalyptic crash, but deftly contriving an imaginative interactive... — BBC Music Magazine, January 2010, 3 out of 5 stars More…

Dickinson: The Unicorns: II. Lullaby (version for flute and piano)

The Unicorns: II. Lullaby (arr. for flute and piano)

Dickinson: Mass of the Apocalypse

Prelude to Reasons for Attendance

Commentary on Reasons for Attendance

Prelude to For Sidney Bechet

Commentary on For Sidney Bechet

Prelude to Love Songs in Age

Commentary on Love Songs in Age

Prelude to Reference Back

Peter Dickinson weaves together musical styles popular and classical, past and present, using a technique of ‘style modulation’.

In his Mass of the Apocalypse the Book of Revelations’ visions of a new heaven and earth interact with the liturgical text. The music of Sidney Bechet and Bix Beiderbecke played at Philip Larkin’s memorial service suggested the means for him to set the words of the great British poet, himself a jazz critic.

His Five Forgeries spoof the styles of famous composers, while the other works showcase different aspects of his many-sided talent.

Tracks 2-6 of this disc were previously issued by Conifer in 1989.

…the Larkin homage, and more particularly the Mass, remain the most substantial work, the latter announced by an all-too-predictable apocalyptic crash, but deftly contriving an imaginative interactive conjunction of Missa brevis…and the Book of Revelation. ...Dickinson's ear for jazz yields some fertile commentary, and if the Five Early Pieces are well-made rather than ear-catching, the Five Forgeries contain some affectionate quasi-pastiches affectionately played.