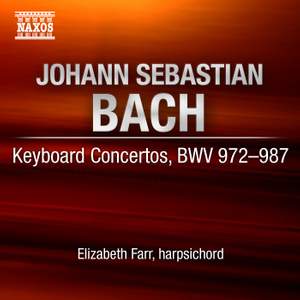 Among the wealth of works composed during his Weimar period, J. S. Bach made 22 keyboard transcriptions of concertos by Italian and German composers: six for two keyboards and pedal (BWV 592–596) and sixteen for keyboard (BWV 972–987), the latter of which are recorded here by multi award-winning harpsichordist Elizabeth Farr.

Complementing these masterful transcriptions is the Prelude and Fugue in A minor BWV894, which Bach later reworked as the opening and closing movements of his Triple Concerto BWV1044.

Farr’s other Naxos recordings have been universally praised.