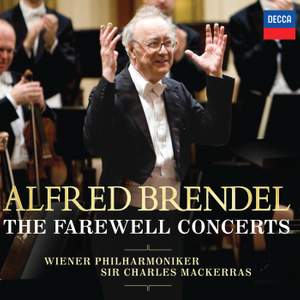 "I salute my listeners and offer them a warm and grateful farewell." Alfred Brendel

Alfred Brendel has for many years been among the world's greatest pianists; in concert, recital and on many best-selling recordings. Here, in his last CD release, recorded in the year of his retirement (2008), he gives his final public performances in solo recital and in concert - revealing a master musician in total command of his art

This 2CD digipak souvenir set captures these two memorable occasions, and is presented at the price of 2 for 1.5.

Recorded live in Hanover, Brendel's farewell recital featured composers with whom he is most closely associated throughout his career - with a set of variations by Haydn, and sonatas by Mozart, Beethoven and Schubert.

It is fitting that Alfred Brendel's final public performance should be in Vienna's beautiful Musikverein, with the Wiener Philharmoniker - an orchestra with whom he has enjoyed a long and fruitful collaboration. The concert was conducted by Sir Charles Mackerras, marking the end of an exceptional partnership between pianist and conductor.

The concert featured Alfred Brendel as soloist in Mozart's concerto in E flat major K271, known as the 'Jeunehomme', after the young woman pianist for whom it was composed in 1777.

The booklet includes Brendel's own notes on the recital repertoire, and tributes from Sir Charles Mackerras and Prof. Dr. Clemens Hellberg of the Vienna Philharmonic - as well as a farewell statement from Alfred Brendel himself.

"The end of my concert career in December 2008, after sixty years on stage, was planned well in advance. I enjoyed looking forward to challenges of a different kind, and calmly anticipated my final performances." Alfred Brendel

"After so many years with Alfred at the top of his profession it is hard to imagine musical life without his unique presence." Sir Charles Mackerras

A Brendel speciality, Schubert's mammoth final Sonata is the most substantial work here, with a heart-wrenching slow movement at its core. Propelled with graceful momentum, this valedictory account is more commanding than even his own previous recordings. Clearly Brendel retired while still at the top of his game.

Here we have Mozart's first great concerto, K271, with Brendel joined by his more recent Mozartian partner, Sir Charles Mackerras. It's a musical marriage made in heaven, especially when you add the VPO to the mix. Every phrase has such detail, such intricate colouring, yet again, it's detailing that comes of long exposure to a work, built of over the years like a patina, rather than something superficially applied on a single level. The performance is unhurried but not in anyway sluggish, and the slow movement is utterly glorious. There is greatness to be found in every bar of these two discs, and that goes not only for the music but the musician too.

These CDs from farewell concerts in Vienna and Hanover...show Brendel as one of the supreme pianists of our time. The deliberately un-virtuosic repertory carries an almost unbearable inwardness of feeling: that quintessential Brendel mixture of intellect and emotion.

The CD set still presents Brendel the supreme artist. He probes and shapes his core repertory — Mozart, Schubert, Beethoven, Haydn — with enviable elegance and ease, and a heavenly lack of show.