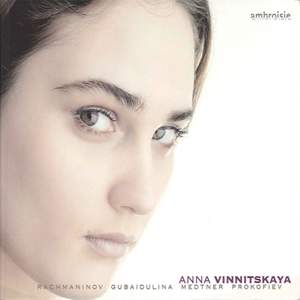 There's little doubt that she has the measure of each work, demonstrating not only formidable technical control but also a truly remarkable range of tonal colouring...there's no denying the sheer... — BBC Music Magazine, May 2010, 5 out of 5 stars More…

New signing and exclusive Naïve Classique artist, Anna Vinnitskaya makes her much anticipated debut album on the Ambroisie label featuring an all-Russian programme of piano sonatas by Rachmaninov, Medtner and Prokofiev and a piece by Gubaidulina.

This is Anna Vinnitskaya’s first ever recording and, unsurprisingly, it has already been met with high critical acclaim. Since its release in France, it was awarded the “Diapason d´Or” (within the “Discoveries” category) and most recently, the “Choc du mois” by Classica Magazine. After going through a period of pronounced disfavour in the second half of the 19th century, the piano sonata enjoyed a veritable renaissance from the start of the twentieth which was due in large measure to Russian composers. Vinnitskaya here explores the way in which the great Russian virtuoso pianist-composers (Medtner, Prokofiev, Rachmaninov) paid homage in their different ways to a genre that was already more than two centuries old. Also included is Chaconne, written by well-known Russian composer Sofia Gubaidulina. At only 26, Anna Vinnitskaya has already established a flourishing international career, both in recital and orchestral performances. In 2007, she won first prize in the Queen Elisabeth Music Competition in Brussels becoming only the second woman in the history of the competition for piano to do so, after Ekaterina Novitskaya in 1968.

There's little doubt that she has the measure of each work, demonstrating not only formidable technical control but also a truly remarkable range of tonal colouring...there's no denying the sheer beauty and richness of her sound, the central movement presented in a particularly haunting manner.