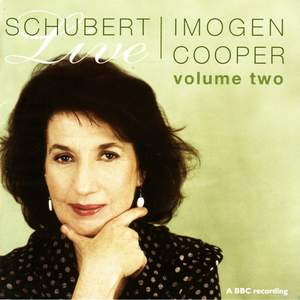 …Imogen Cooper is second to none in Schubert. The sound she so carefully makes is a glorious companion throughout, casting radiance on the first two Moments musicaux, the spellbinding last of... — BBC Music Magazine, February 2010, 5 out of 5 stars More…

Schubert: Moments Musicaux No. 2 in A Flat Major: Andantino

Schubert: Moments Musicaux No. 6 in A Flat Major: Allegretto

No. 1 in F Minor: Allegretto moderato

No. 2 in A Flat Major: Allegretto

No. 3 in B Flat Major: Andante

No. 4 in F Minor: Allegro scherzando

Imogen Cooper’s Schubert Live, Volume One (AV2156) was a runaway success both critically and commercially. An already highly respected artist found her profile, both in the media and at retail, raised to new heights. Imogen continues her exploration of Schubert’s late piano music with the second volume in her ongoing series for AVIE, recorded live at the Queen Elizabeth Hall. Her selection for Volume Two reflects the public appetite, in the late 1820s, for shorter piano pieces, which resulted in Six Moments Musicaux, D780 and Four Impromptus, D 935. Even the publisher of Schubert’s G major Sonata, D894, described the work as a ‘Fantasy, Andante, Menuetto and Allegretto’, knowing that marketing the work as individual character pieces would generate healthier sales.

…Imogen Cooper is second to none in Schubert. The sound she so carefully makes is a glorious companion throughout, casting radiance on the first two Moments musicaux, the spellbinding last of the four impromptus, and even a rare moment of transcendence in the otherwise straightforward if well sprung German Dances. ...she finds her own independent way with the opening of the C minor Sonata, strong and surprisingly buoyant with lovely staccatos and later magical enharmonic transformations. The tour de force of the final tarantella, following on the heels of the elusive minuet, never palls in its mercurial variety, and the slip into B major is a glimpse into a strange new world, a little touch of heaven.

These two CDs contain some of the most wonderful Schubert-playing I have ever heard. …one thing Cooper can do is make the piano sing… Colours are gracefully shaded, dynamics are artfully controlled and contained; there are no intrusive idiosyncrasies... to detract from the enchantment. ...there is throughout a serenity and poise to the playing which is pure balm for the soul. Here is a great artist of taste and integrity.

the piano could not be more naturally captured, nor the feeling of live music-making conveyed to the listener. She displays a very special feeling for the composer's lyricism, and the warm colouring and fine shading of timbre are as pleasing to the ear as the many subtle nuances of phrasing, and her bold sonority at higher dynamic levels is particularly satisfying.

Every note amply justifies Cooper’s Schubertian credentials. She maintains perfect balance between intellect and emotion, tuning into what the Germans call Sehnsucht — a kind of longing — and subtly delineating shades of light and dark...Outstanding.