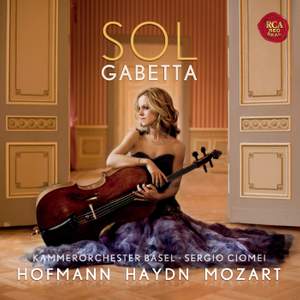 …lovely performances from a cellist who combines a winningly smooth cantabile with a focused light tone and incisive rhythmic precision. The Basle Chamber Orchestra gives support which is handsomely... — Gramophone Magazine, March 2010 More…

Mozart: Flute Concerto No. 2 in D Major, K. 314 (Arr. for Cello and Orchestra by George Szell)

The Argentinean cellist Sol Gabetta devotes her new recording to concertos from the Viennese Classical period. Joined by the Chamber Orchestra of Basel, she has coupled Haydn’s famous C major Concerto with two rarities, one by Haydn's contemporary Leopold Hofmann and the other by Wolfgang Amadeus Mozart. Whereas Hofmann's concerto is an original work, the other concerto is an arrangement of Mozart's Oboe Concerto K314 by the Hungarian-American conductor Georg Szell. As Mozart left us not a single composition for solo cello, Szell collaborated with Mozart researcher Alfred Einstein to create a solo piece. However, Szell took the Andante from the Violin Concerto K470 for the slow movement. Sol Gabetta's recording, on the other hand, includes a version of the Oboe Concerto's Andante specially prepared by the harpsichordist and pianist of the Basel Chamber Orchestra, Sergio Ciomei. Hofmann was a highly regarded composer in his day, considered the equal of Haydn and Gluck. His Cello Concerto in D Major is roughly contemporary with the C major Concerto by Haydn which also appears on this disc.

…lovely performances from a cellist who combines a winningly smooth cantabile with a focused light tone and incisive rhythmic precision. The Basle Chamber Orchestra gives support which is handsomely coloured and stylishly clean-lined… making them a good match for their soloist and helping to create a happy overall impression of talented young artists having fun together and avoiding the routine.