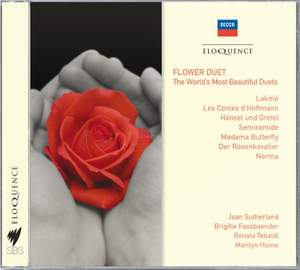 The World's Most Beautiful Duets

Since the beginning of opera, the convention of the duet, in which two characters simultaneously express their feelings, has been one of the staple ploys of musical dramatists. Characters may join their voices in a unity of feeling, or in extreme disagreement, or in any one of the thousand shades in between; though in the examples we have here, all involving the combination of soprano and mezzo-soprano voices, the feelings expressed are held in common between the two singers.