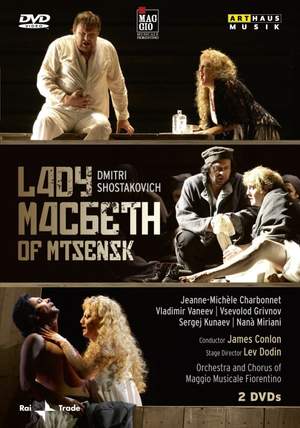 …James Conlon… has conducted Shostakovich's masterpiece on both continents… There is plenty of passion in the pit. …New Orleans-raised Jeanne-Michèle Charbonnet proves a powerful if one-dimensional... — Gramophone Magazine, January 2010 More…

At first glance, the title of Shostakovich’s opera seems to speak for itself: Katherina, neglected and unhappy in her marriage, commits the most heinous crime just like the Shakespearian Lady Macbeth. But Nikolai Leskov’s short novel, which portrays Katherina as a monster, was only the starting point for Shostakovich to elicit understanding for an oppressed woman whose pursuit for self-determination is suppressed by society. Through combining satiric, grotesque and tragic elements in his music, Shostakovich succeeds in striking the balance between repulsion at Katherina’s immoral acts and sympathy for her. Violence, eroticism and the paralysing boredom of Russian society in the 19th century are the founding elements of this composition.

The choir and orchestra of the Maggio Musicale Fiorentino conducted by James Conlon accompany tremendous soloists such as Jeanne-Michèle Charbonnet, Vladimir Vaneyev and Vsevolod Grivnov in the original language in this live recording.

…James Conlon… has conducted Shostakovich's masterpiece on both continents… There is plenty of passion in the pit. …New Orleans-raised Jeanne-Michèle Charbonnet proves a powerful if one-dimensional actress in the title-role. The other key protagonists are authentically Russian. The most distinguished singing comes from Vladimir Vaneev... The main attraction of ArtHaus's DVDs ought to be the production of Lev Dodin, long-term director of St Petersburg's Maly Drama Theatre. ...his Lady Macbeth is conceived wholly in terms of realism... Exceptionally, the episode where the shabby peasant discovers Zinoviy's corpse is staged as a group tableau. Mostly straightforward, the cinematography switches to blurry black-and-white for the appearance of Boris's ghost.

a compellingly ambiguous work, under Lev Dodin's direction at the Teatro Comunale in Firenze, it comes to life even more vividly and viscerally. This is a live recording in every sense of the term, and Jeanne-Michèle Charbonnet brings the two sides of Katerina's character - the twisted criminal and the oppressed victim - across perfectly.