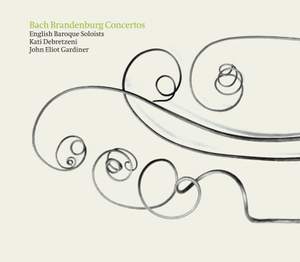 Gardiner only conducts two of the six concertos but rehearsed the others with the players. The responsibility of performing the remaining four is left to the hand-picked musicians of the English Baroque Soloists led by the brilliant, Kati Debretzeni, a true Konzertmeisterin and the inspirational presiding virtuoso of this project.

This recording follows a phenomenal 11-concert residency at the Spitalfieds Music Winter Festival in December 2008 and January 2009. John Eliot Gardiner led the English Baroque Soloists and the Monteverdi Choir in performances of JS Bach’s Christmas Oratorio, Brandenburg Concertos and Motets. Every concert was well received by public and press alike, with standing ovations from the sell-out audiences and high critical acclaim:

"Gardiner encouraged rampaging exuberance from his excellent horns, subtle dynamic variations from oboes and strings, and some unusually complex phrasing…delivered with such conviction.” The Times

The six “Brandenburg” Concertos, described by Bach as ‘Concertos for several instruments’, are widely regarded as among the finest musical compositions of the Baroque. Now considered a benchmark of Baroque music, the concertos still have the power to move people almost three centuries later.

…a constant delight. …Kati Debretzeni deserves the highest praise: her phrasing, punctuation and inflective charm contain all the communicative apparatus of the finest oratory, bringing, to my ears at least, something entirely fresh to this sublime music.

this disc stands up on its own quite simply as a smashing performance that has evidently been recorded for sheer delight in the music...The ensemble playing is a model of cohesive teamwork, but the players also shine as individuals in the many virtuoso solo passages

…these performances are recognisable enough as being in the Gardiner mould. There is the usual clarity of texture and detail; few accounts of Nos 3 and 6 have such chiselled edges and unobtrusively assertive inner parts. Tempi are brisk, and while they are not hard-driven in the way they might have been 20 years ago, the finale of No 2 charges to a startlingly abrupt finish. ...these are undeniably Brandenburgs of flair and understanding.

Gardiner’s Bachian zeal hovers over the performances: these are refreshingly unmannered accounts, brilliantly played... The Fourth — for violin and two recorders — and Fifth — with solo violin, flute and harpsichord — have rarely sounded more intimate, while the all-string concertos, the Third and the violinless Sixth, tingle with the spirit of baroque dance.

[Gardiner] lets his band get on with it and the results...are superb. The English Baroque Soloists, led by Kati Debretzeni, listen to each other like a jazz group, mirroring and echoing the other players, responding to subtle changes of dynamics or tempo.